Rising wages in China could push more than 80 million manufacturing jobs abroad over the next three to five years, with African nations well placed to lure many of them their way, the World Bank said. 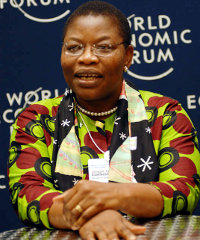 China’s economic success and hunger for resources have helped boost African growth, but Ezekwesili cited a World Bank estimate that rising Chinese wages would lead to manufacturing firms going elsewhere, taking with them 83 to 85 million jobs.

“They are going to be looking to move – Africa is going to be an important destination for that,” she told Reuters in an interview, calling on African countries to “step up their game” to improve the business environment to lure jobs their way.

“It will not only be China. At some point it will be a number of the emerging economies. They will move on and some of their own areas of previous advantage will need to move,” she said on the margins of an AU summit in Equatorial Guinea.

Ezekwesili said inflation across the continent was a concern, especially in food-importing nations like Ethiopia, where it has hit double digits, but said leaders appeared to be sticking to prudent fiscal policies.

As in 2008, African nations have been hit by rocketing prices for food and fuel, which have combined with political frustrations to ignite demonstrations in countries including Senegal, Burkina Faso and Uganda.

Ezekwesili warned that unlike in 2008, when the continent had enjoyed several years of strong growth, local economies were now still trying to shake off the gobal financial and economic crisis and so were more vulnerable to price shocks.

“If this management of the situation is not deftly done, macroeconomic stability could unravel,” she warned.

Ezekwesili forecast growth on the continent at 5.1% next year and 5.4% in 2013, slightly lower than June forecasts of 5.7% for sub-Saharan Africa in both years issued by the Bank in June.

While a few African leaders are meeting their target of investing 10% of the budget in agriculture, Ezekwesili said the figures were rising toward 5% to 7% in many states.

“The conversation on agriculture is deeper than it used to be. What needs to happen is organising the framework of the way interventions can be integrated,” she said.

Relative stability, sounder economic policies and solid growth in more nations have lured more international investors to tap into the potential of the continent they once feared.

Ezekwesili put the current rate of growth of employment in the formal sector at around ten percent a year, but said that this was not enough keep up with the growth in labour supply as around 10 million young people entered the market each year.

Ezekwesili urged policy-makers to be flexible and support the informal economy in the hope that it would one day translate into jobs in the formal sector.

“They are not staying completely idle  . . . You will be surprised how those operators themselves can decide on formalisation. Leave it to them . . . but don’t try and formalise them by decree,” she added.

At a summit otherwise dominated by Libya’s conflict, African youth representatives forced themselves onto the agenda with warnings that sub-Saharan Africa was not immune to the spread south of uprisings around the Arab world.

“The wakeup call for leaders on the continent is that today’s world is an endless community of young people not in any way held hostage by the underperformance of their countries,” said Ezekwesili. “They seek for something higher and will do anything to get something better.” (Reuters)