As Africa’s economy gains momentum, more and more professionals are moving to the continent to tap into the opportunities. James Deiotte, known as Jim amongst colleagues and friends, is the new Ernst & Young Africa Tax Leader and is one of those people. Originally from the US, Deiotte and his wife and daughter relocated to Johannesburg less than two months ago. The decision to move continents was made almost instantly and something Deiotte refers to as a “no-brainer”. 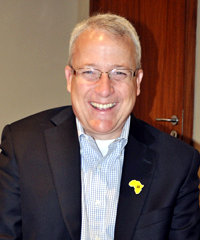 It was Mother’s Day weekend in early May when Deiotte was offered the chance to take up the position in Africa, a continent he had never visited before. Four days later, he and his wife arrived in South Africa to see what they were getting themselves into. “I think it was close to 10 days that we spent in Johannesburg and we just absolutely fell in love with the city, the community and the people.”

This is not the first time that Deiotte has moved with his family to a foreign country for work purposes. Having spent four years in Warsaw, Poland, he is no stranger to emerging himself in a foreign culture. However, Africa, with its 54 very different countries and many diverse cultures, is incomparable. Yet Deiotte is nothing less than excited to be in the continent.

“This is going to be my last posting for my career which is a good thing and it’s an opportunity to be part of, and work with, this tremendous, young, talented group of professionals and colleagues in the business community,” Deiotte told How we made it in Africa on the sidelines of the recent Ernst & Young Africa Tax Conference, held outside Hermanus, South Africa.

Deiotte sought advice from his connections from around the world before taking the position in Africa. “We reached out to them the day we found out and immediately we were getting very positive responses about Africa and over and over again it was about the [African] people, saying, ‘you are going to just love these people, they are great, they have a tremendous energy’.”

“We did a good job of making sure we understood what we were walking into, both from a personal as well as a business point of view … I do think that there is just so much interest in a very positive way taking place in Africa,” continued Deiotte. “I have said it and I will continue to say it, it really is about the people.”

Deiotte said he has watched companies make decisions on where to – and where not to – invest and what it often comes down to is the workforce, their energy, work ethic and what motivates them. “I feel that is what is taking place here right now, that everybody is just looking at this place with great earnest and trying to make their decisions on where to enter this vast continent … I think that is becoming the more interesting question; its where to enter, continent wise, not a matter of ‘if’. I think everybody is lining up to come here.”

“In terms of the sophistication and capabilities of people, I see virtually no differences,” added Deiotte. “I see them as world-class capable professionals in any way that you would measure it.”