Over the past few years there have been countless reports and media articles about the rise of the African consumer. However, between all the news stories of brands such as KFC, Samsung and Toyota growing their presence in Africa, it could be easy to get carried away with the African consumer story. 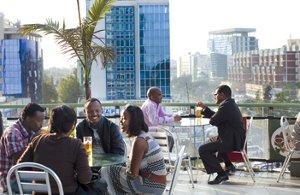 David Cowan, a senior economist for Africa at Citigroup, believes there needs to be a better understanding of the continent’s growing middle class.

Last year the African Development Bank (AfDB) published a much cited report that defined the middle class as those with daily consumption of US$2-$20 per day. According to the AfDB, in 2010 the African middle class accounted for 34% of the population, nearly 350 million people. Many commentators have, however, conveniently ignored that the AfDB divided Africa’s middle class into three sub-categories. At the bottom end is what the AfDB calls the “floating class”. These people spend $2-$4 a day, and can easily slip back into poverty. About 60% of the middle class fell into this category.

In a recent report, Cowan explains that the more widely accepted definition of an emerging market middle class consumer is someone earning $13.70 per day. “It is at this level and above that people really increase their purchasing of large consumer durables, notably autos and houses.”

According to the AfDB, in 2010 there were just under 45 million Africans with consumption spending of $10-$20 a day.

“Does this mean that the sub-Saharan Africa middle class consumer story has no legs? We think not, but it does have to be more clearly understood,” says Cowan. “While doubts can be thrown around about the quality of the data, the overall pattern of rising consumption spending does seem to fit, with caveats, into the trends identified in household income and expenditure surveys in many sub-Saharan African countries. For example, many of these surveys show that households now eat one hot meal a day and that a rising number of households now own a radio, a television, DVD player or a bike.”

Despite the recent interest from foreign consumer goods companies and retailers, Cowan says it is important to note that income levels in the region are still very low. “We think that at least in the coming decade or so, the key consumer markets in sub-Saharan Africa will largely be low-end, with a splash of high-end colour … While there can be talk of an emerging middle class, we think it is much more logical to talk about the emergence of new consumer market in sub-Saharan Africa. This new consumer will, for all extents and purposes, largely consume basic goods and services for the next decade or so, assuming that the overall sub-Saharan Africa growth trend remains robust.”

He points out that over the coming years there will be strong growth in demand for appropriately priced basic products such as pasta, processed meat, toothpaste, shampoo, shoes and clothes.

The region will also see a growing market for durable goods – including housing related products such as metal roofs, door and window frames, paving slabs and paint, as well as “cheaper-end” appliances and electronics such as stoves, fridges, radios, televisions, and DVD players.

Cowan says the concept of “trading up” will be an important commercial idea over the coming years. “Companies that have a steady base sales line, but can benefit when consumers have additional income to spend are likely to be winners. In the beverage industry this is already clear. If a consumer has an extra $5 in his pocket at the end of the week, they can trade up to buy a clear bottled beer as opposed to a traditional brew. The next logical step is that a beer drinker can be encouraged to “trade up” to drinking wine or spirits. This argument can be applied widely to supermarkets, fast food outlets, tobacco and beyond.”

The Economist Intelligence Unit recently said that Africa’s retail potential over the next five years is unlikely to match that of the BRIC countries, but that retailers are looking to invest now, in order to reap the benefits in ten to 20 years.