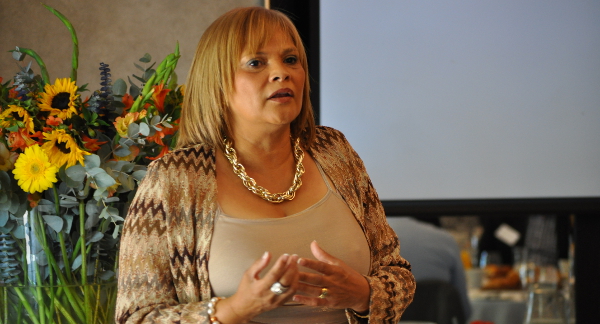 “One of the things that has made me successful is I’m not scared to say what I do,” says Delia Cupido, owner of Chameleon Pre-schools, at the launch of the 2016 Sanlam/Business Partners Entrepreneur of the Year.

South African Delia Cupido (55) is a serial entrepreneur with various businesses in Cape Town. She is the founder of estate agency, Delia Properties, and owner of Chameleon Pre-schools and Toddler College through which she runs three early-childhood development centres and a junior school in low-income areas. She also runs a teacher and parent training centre and employs around 50 staff in total.

Coming from a poor background, Cupido started thinking as an entrepreneur at age eight when she sold polony (a processed sausage) around her community. She did not complete high school as a teenager and married young, but at age 37 she decided to go back to school and get her Matric certificate. A few years later she pursued an LLB degree at university where she was exposed to property law. She bought her first investment property not long after, and today she has a portfolio of 26 properties.

At the launch of the 2016 Sanlam/Business Partners Entrepreneur of the Year competition last week, Cupido shared some tips that helped her get to where she is today.

According to Cupido, she was advised against buying her first investment property. “My friends said, ‘Why do you want to buy that property? It’s the crappiest property?’ For me that was just an opportunity to buy it.”

“You must persevere for what you love doing. It is important to go after what you believe in and to not hesitate because you are scared of failure or rejection.”

Look for opportunities within challenges

“If I think about the definition of an entrepreneur, for me it is somebody that sees the opportunity where somebody else sees the challenge. And there are loads and loads of opportunities out there.”

One of the opportunities that Cupido spotted was the need for parent training and education in areas where children were particularly vulnerable to drugs and crime.

“We are sitting with a crisis, and the crisis is not with our children. Our crisis is with our parents because what you don’t know you can’t give,” she highlighted.

Don’t be a secret agent to your own business

Entrepreneurs should also not shy-away from talking about their businesses with others.

“I’m not saying vomit all your information over people… but when you leave any space you are in, as an entrepreneur, people should know what you do. That is the only way to success,” she emphasised.

“We are [often] secret agents to our own business. Why? Because we are fearful of what people are going to think of us. But they are going to think anything of you anyway so it might as well be in your favour that they know what you do.”

She noted that talking to others can also open doors for business opportunities and valuable advice.

“One of the things that has made me successful is I’m not scared to say what I do.”