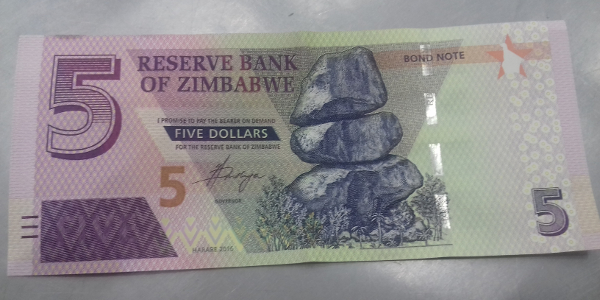 Zimbabwe’s new $5 bond note is the highest denomination of the legal tender so far.

Earlier this month the Reserve Bank of Zimbabwe (RBZ) released its $5 bond note – the highest denomination so far of the legal tender that is supposed to be valued one-to-one with the US dollar. But already it has started to depreciate – which is what many economists predicted.

According to Zimbabwean economist, Dr Gift Mugano, the bond note has lost about 10% of its value on the black market with traders offering to convert them into US dollars at a premium. Many informal traders and small shops list separate US dollar and bond note prices for their goods. Some even include a separate price for payments made electronically by card, as banks are issuing bond notes to those withdrawing cash.

The RBZ announced in May 2016 that it would start printing money again in the form of bond notes, and many feared the state was trying to reintroduce the country’s Zimbabwe dollar – which was abandoned in 2009 after experiencing one of the worst cases of hyperinflation in world history. The central bank said the bond note would simply be a solution to the country’s severe shortage of US dollars, which has been the main legal tender since 2009.

Zimbabwe’s collapsed manufacturing sector means it has been importing more than it exports. As a result, US dollars have been flying out of the country to pay for necessary goods. The RBZ’s solution? Simply print bond notes (valued one-to-one to the US dollar) to circulate in the market alongside US dollars. The bank is also using them to pay a 5% incentive to exporters.

Zimbabweans have already been using bond coins – 1c, 5c, 10c, 25c and 50c – since 2014 to help consumers transact in amounts less than the US$1 note (which is the smallest amount of the US currency in circulation in Zimbabwe). And towards the end of last year, the central bank introduced the $2 bond notes and the $1 bond coin to the market – with total bond notes making up less than 1% of the total cash in circulation.

“The $2 bond note and $1 bond coin were being used for change conveniently. But you are beginning to see more problems now when the central bank introduced the $5 note. It means it is very easy for me to carry $100 or $200 worth using $5 bond notes,” he notes.

“The rate of the bond note to the US dollar has depreciated in a way. It is no longer one-to-one… This happens only when you are dealing with larger transactions.”

Importers are also willing to pay premiums to convert bond notes into US dollars, because bond notes can’t be used to buy goods from abroad. Furthermore, Mugano says that the $5 bond note seems to have a much stronger visual presence in the market than the $2 denomination – with consumers coming across it more frequently in day-to-day transactions. This has caused some concern that bond notes are making up a greater supply of the total cash in circulation.

“When the $5 bond note was released, it hit the market rapidly. Even when you go to the bank you can get $100 or $200 worth of bond notes – and [yet] they are saying its only 1% of the total cash in circulation… But do you expect to [come across] 1% of the total cash wherever you go? You don’t… It could mean too much money in the market,” he adds.

“So that in itself creates panic, and people right now are selling bond notes to get US dollars.”