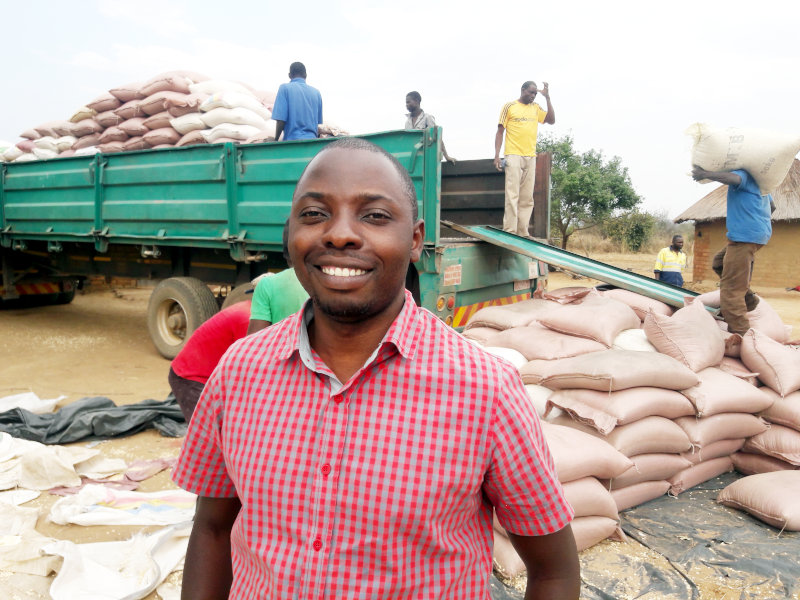 We speak to Titus Mboko, the managing director of Grain Solutions Agro Industries, a Zimbabwean company that produces maize meal, bread flour and animal feed. The business is based in the city of Bulawayo.

1. Give us an overview of Grain Solutions Agro Industries’ operations.

We started as a grain trader by buying low from other traders and selling high to blue-chip agri-processors that didn’t want to be involved in the hassle of bringing grains to their doorstep.

Over the years, we have evolved into an agri-processor of mainly maize and wheat where we add value by milling the grain into various value-added products such as maize meal, bread flour and animal feed. We are essentially a milling and food packaging business that produces a highly nutritional fortified maize flour consumed in Zimbabwe as a staple food. The product is made from grains sourced directly from smallholder farmers in the southern parts of the country.

By sourcing from smallholder farmers, we are stimulating the rural agricultural space by offering farmers a sustainable market for their grains.

We also offer transport and logistics services particularly to the agricultural value chain in which we operate. Our trucks bring grain from the rural areas to our factory; on their return to the farming areas the same trucks transport finished products to sell to rural customers.

We follow both a B2B and B2C business model and target corporate and individual end-users of our products. These include feedlots, agro-industrial processors – such as breweries and feed manufacturers – as well as urban backyard poultry farmers and rural smallholder farmers who keep beef or dairy cattle or poultry.

2. How did you come up with the idea to start the company?

My childhood and background influenced the formation of Grain Solutions Agro Industries. I grew up in poverty-stricken rural Zimbabwe as the last born to peasant farmers who grew maize and other subsistence crops. I initially shunned a career in agriculture because I had witnessed my parents struggle to put me through high school. When my sister later took over the responsibility to pay for my university fees, I chose to study accounting.

My dream was to become a qualified chartered accountant. However, when I graduated from the University of Zimbabwe with an honours degree in accountancy, I worked for several large companies spanning many sectors in Zimbabwe, including telecoms, transport and logistics, advertising as well as healthcare for seven years.

I then joined a food company and rose through the ranks to become a general manager. During this stint, I realised there was so much value that could be created, added and delivered across the agricultural value chain. I noticed many gaps during my time at the food company as I interacted with smallholder farmers who formed a huge part of the supply chain. The stories and struggles narrated by these farmers were almost identical to that of my parents: low prices for their produce, poor transport systems, remote and highly unfair markets and unfavourable payment systems.

The memory of how my parents struggled throughout their lives compelled me to do something about it. Grain Solutions Agro Industries was formed in July 2013. I intended to offer solutions on how best to make agriculture more attractive and profitable. A year later I voluntarily resigned from my job to actively pursue this journey full time.

I jumped into this without the requisite minimum qualification in agriculture. It has been a journey of passion littered with numerous hurdles.

3. What challenges in the agricultural value chain are you addressing?

Smallholder farmers in Zimbabwe struggled to access viable markets for their products because of various factors: lack of reliable transport, long distances to the market, minimal post-harvest handling capabilities (warehousing, grading, cleaning and packaging) as well as poor market prices.

Grain Solutions Agro Industries is pursuing a three-pronged approach to solve some of these challenges: providing a ready market for rural smallholder farmers; production of a highly nutritious but affordable products; and the provision of integrated services such as transport and logistics, warehousing and storage at village level, inputs supply and mobile money transfer services. In this way, we create shared value for our smallholder farmers; we treat them as business partners and everybody wins.

We are addressing nutritional problems at the household level through our fortified products made from locally sourced small grains.

Our transport and logistics services assist the farmers to access markets. Our village aggregation points ensure farmers minimise post-harvest losses because they no longer need to store their grain while looking for buyers. Our trucks bring groceries, feed, implements and tools when they go to collect grain at these village aggregation points. This means farmers don’t have to spend additional money to travel to the cities to buy these products.

4. You source your supplies from smallholder farmers. What arrangement do you have with them?

We have a win-win relationship which we have built over the past eight years while working with smallholder farmers in Masvingo and Midlands provinces.

In 2014, when we began our operations, we built aggregation points in villages where farmers can bring their crops for immediate payment. In Zimbabwe, the largest markets for maize and other grains are Harare and Bulawayo but these cities are far from most farmers in rural areas. We are addressing this by bringing the markets to the farmers. In addition, our aggregation points also offer farmers access to agricultural inputs, groceries and other services. These act as our service centres where farmers can get all our services and products.

5. The company has won major supply contracts. Tell us about how you secured these.

In the early stages of our operations, we deliberately focused on establishing our name in the grains industry as a reliable and efficient supplier of maize, wheat and soya beans. We diligently and consistently supplied small-scale commercial millers in Bulawayo, Gweru and Masvingo to build a rapport.

At the time, SNV Zimbabwe (a not-for-profit international development organisation) was running a market linkages programme and we attended the workshops on branding and packaging. We also received tremendous support from organisations in Bulawayo – such as Oceans Foods, Sunset Marketing, Agrifoods and Bulk Commodities – which gave us contracts to supply them with maize grain and wheat.

We built up our references and prepared our company profile and approached bigger agro-processors in Harare. We also made branded promotional gifts such as golf shirts, diaries, notebooks and pens to distribute with the company profile.

Startups such as ours rarely branded, especially those that supplied maize grain. We were awarded lucrative contracts with beverage manufacturers, millers and oil pressers to supply maize grain, wheat and oilseeds (soya beans). These contracts enabled us to even buy grain from other traders and merchants as we could offer a much better price.

6. How competitive is the market?

The milling and food industry in Zimbabwe is fiercely competitive and is dominated by over 100 large-scale agro-industrial processors and small-scale commercial millers. However, big players such as National Foods and Blue Ribbon Foods have been operating for a long time and control the market because they have large scale production assets across the value chain (transport, storage, technology, distribution channels and equipment) and their products are cheaper than small-scale players that do not enjoy production economies. Maize is a major staple food in Zimbabwe. As such, the milling industry is one of the biggest sectors where competition tends to be high.

Product quality, innovation and market delivery channels are areas where players try to outdo each other. Investments in plants and equipment, as well as new technology to achieve economies of scale, is another competitive strategy employed by market players.

7. What are some of the challenges in your industry?

Price control regimes, low productivity, climate change, unavailability of key inputs and high utility costs are some of the major hurdles bedevilling the milling and food industry in Zimbabwe. Government interference in the milling industry in the form of price controls for both maize and maize meal result in weak value chains thus eroding the sustainability of the agricultural sector.