The 2011/2012 agriculture season looks bright and promising for YamBEEji Honey and Rice Products, a processing firm based in the rural areas of Zambia. The company has engaged more than 1,000 outgrower farmers in the Zambezi District to cultivate rice for the season. 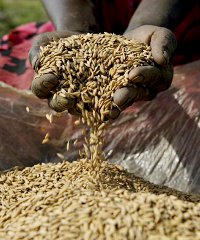 YamBEEji is planning to increase its annual production volumes of rice from 800 tons to 1,300 tons by the end of 2015.

YamBEEji has been operating as a private entity since 2006 and is engaged in rice production, processing and packaging. The firm is also involved in the buying and packaging of honey, which is marketed in the north-western part of Zambia and other towns in the country at wholesale and retail level.

“We aim at becoming a successful and vibrant rice milling company, with a strong outgrower scheme partnership network across the country, which is able to meet the demands and volume supplies of the company,” CEO Chibbonta Chilala told How we made it in Africa in an interview.

This will be in line with Zambia’s Sixth National Development Plan (SNDP), which main thrust is to increase and diversify agriculture production and productivity with a view to raise its contribution to the country’s gross domestic product (GDP) by 2015.

The firm is planning to increase its annual production volumes of rice from 800 tons to 1,300 tons by the end of 2015. YamBEEji also wants to become a major supplier of processed pure variety rice and rice seed in the country and the region by 2020.

Chilala said that in order to improve quality, quantity and profitability to both the company and its outgrowers, YamBEEji had started training farmers in the latest technological farming and harvesting practices as well as the introduction of new pure varieties and purification of the traditionally grown varieties.

He bemoaned the lack of trade in local rice, saying that the system is not very well organised. This is a major disincentive for farmers to increase production. Currently, only between 15% to 40% of domestically produced rice is marketed. The ratio of marketed produce is largely a function of proximity to markets.

Chilala said his company is considering expanding its supply network to the Democratic Republic of Congo (DRC) and Angola.

Maimbolwa Mulikelela is How we made it in Africa’s Zambia correspondent.