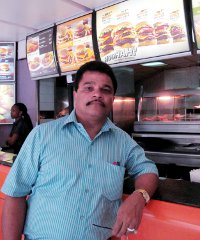 So says Deenesh Ghosh as he discusses the expansion plans for pizza restaurant Debonairs in Tanzania. Ghosh is the finance and administration manager for the company owning the Debonairs as well as quick-service hamburger restaurant Steers franchises in the east African country.

Seated behind his desk in a modest office behind the Samora Machel Avenue Steers outlet in Dar es Salaam, Ghosh tells How we made it in Africa that it all started in 1999 when Magic Kingdom Company Limited, a locally registered entity, acquired the franchise licence for Steers and Debonairs from South Africa’s Famous Brands.

Ghosh was hired from India. He says that initially it was difficult to deal with the local Swahili language and navigating Tanzania’s regulatory environment. “It was a big challenge for me. First of all, the language. Second, all the tax and licence procedures are totally different. And I was new in this [restaurant] business; basically I’m a finance guy. To start a business, I’ve got a fantastic experience in this country. There are a lot of things that I’ve learnt here.”

Both Steers and Debonairs have significant footprints in South Africa, with over 750 outlets between the two. In South Africa the Steers brand is renowned for its hamburgers. However, in Tanzania, Steers’s fried chicken lunch box offering accounts for 70% of sales. “The burger concept is less [popular] than in South Africa,” says Ghosh.

He explains that Steers and Debonairs attract a lot of office workers, mostly because it is not the culture to take food to work. “Most of the office goers here in Tanzania . . . do not bring food from home, they eat outside. In India most of the office goers they carry their food.” Because alcohol is not sold on the premises, the restaurants are also popular with families.

Magic Kingdom currently has two Steers and one Debonairs restaurants in Dar es Salaam. There was, however, a time when it had outlets in Uganda, the northern Tanzanian city of Arusha, and at the Mlimani City Mall in Dar es Salaam. The Ugandan licence was sold and the other Tanzanian outlets closed down due to problems with the location of the restaurants as well as management issues. “Here we are successful at Samora Steers, but in Mlimani we were failures because we didn’t choose the right location. Location is very important [in the] restaurant business,” notes Ghosh.

In Tanzania the company employs close to 100 workers, most of whom are locals. He says that around 70 suppliers also survive because of the business. Although most food ingredients are sourced in Tanzania, packaging material is still imported from South Africa due to local manufacturing constraints.

Standard Bank predicts that Tanzania’s economy is likely to grow by 6.3% in 2011, accelerating to 7.4% in 2012. Frost & Sullivan says that Dar es Salaam is the African city that will see the most growth up until 2025. Officially the city is home to around 3.2 million people, although some say the real figure is closer to 4 million.

However, Ghosh and his team could soon meet their toughest competitor. US-based Yum! Brands is currently looking at bringing KFC to Tanzania, following successful launches in countries such as Nigeria and Kenya. Yum! is targeting 120 restaurants across the east African region by 2020. Ghosh doesn’t seem overly concerned. “We are not afraid. As long as we [maintain] our standards and give better quality because Steers is also a very good name. We are ready to compete, it is not a problem.”