Southern Sudan will in early 2011 hold a referendum to determine whether to remain part of a united Sudan or become a separate state. The referendum was a core component of the 2005 Comprehensive Peace Agreement (CPA) that ended decades of conflict between the Southern Sudan People’s Liberation Movement (SPLM) and the Khartoum government. 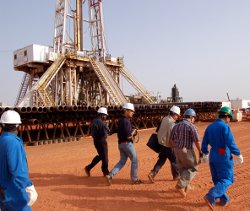 Oil revenues will be a major point of contention between Sudan's north and south.

Should the south choose to separate, the two sides will have to negotiate over various key issues:

Borders – Five major border areas are in dispute. The first, and perhaps most potentially explosive, is around the oil-producing region of Abyei. The region will decide in a separate referendum also in January whether to join the south or the north. The borders were outlined in a July 2009 ruling by the Permanent Court of Arbitration at The Hague, but demarcation has stalled. At the same time, the northern Misseriya community, largely drawn out of Abyei under the new borders, has denounced the ruling.

According to SPLM secretary-general, Pagan Amum, four other areas are in dispute: the northern-most border separating Renk county in Upper Nile from the north’s White Nile state, the borderline running north-south between the south’s Unity state and the north’s Southern Kordofan (this will determine who controls the Heglig oil field), whether the Bahr al-Arab river forms the exact border between the south’s Bahr el-Ghazal and Darfur in the north, and which river forms the exact western-most dividing line between Western Bahr el-Ghazal and Southern Darfur.

Oil – An estimated 82–95% of the oil fields are in the south (depending on where the border is drawn). Oil revenue accounts for 98% of Southern Sudan’s government revenue, and 60% of the national budget (according to 2008 figures). The sole export route for the landlocked south is a pipeline running to the north to Port Sudan on the Red Sea. Under the CPA, the two sides divide proceeds from oil pumped in the south. They will have to negotiate how to share oil revenue, as well as any user fees levied against the south for using the pipeline and refineries. The two parties must also negotiate how to honour current oil contracts.

Water – Under a 1929 agreement between Egypt (which had control over Sudan) and Britain, and a 1959 agreement between Egypt and Sudan, they control up to 90% of the water. Will Southern Sudan recognise these old treaties, or will it work with Nile basin countries in eastern Africa to work towards a “fair” accord? If it honours the colonial pacts, as it has indicated to the Egyptians, the south must then negotiate with Khartoum over what percentage of the 18.5 billion cubic metres of water designated to Sudan it can claim.

Nationality – The fate of southerners living in the north and northerners living in the south has to be negotiated. Questions of citizenship and rights will have to be addressed, as well as ease of travel between the two. Egypt and Sudan have signed a “Four Freedoms” agreement, granting Egyptians and Sudanese free movement, residence, work, and ownership in either of the two countries. Could something similar be decided between the north and south?

Debts and assets – The south’s share of Sudan’s sizeable national debt – estimated by the International Monetary Fund in 2008 at US$34 billion – will be another issue. Analysts say the north will want a seceding south to take on a portion of its public debt burden. SPLM officials have rejected such suggestions, often accusing the north of using that borrowed money to wage war against southerners. There is also the question of national assets and the properties of state-owned companies in the south.

Currency – After the CPA, Sudan’s official currency, the dinar, was replaced with the Sudanese pound. If the south secedes, will the north and south continue under the pound? A newly independent south could choose to create its own currency, or switch for a period to an established foreign currency such as the US dollar. Analysts say a decision to maintain the Sudanese pound on both sides could bond the two economies together.

Security – The two parties must agree on what happens to key aspects of national security. They will have to decide how to demobilise the Joint Integrated Units and what would happen to the southern portion of Sudan’s national intelligence apparatus.

This article was first published by IRIN