South African clothing and food retailer Woolworths is looking to expand its food stores across its existing footprint in southern Africa, according to the company’s group director for retail operations, Paula Disberry. However, a significant obstacle exists in the procurement of fresh local produce. 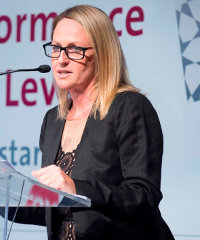 Speaking at the 24th annual International Food and Agribusiness Management Association (IFAMA) World Forum and Symposium in Cape Town yesterday, Disberry noted how rising consumer spending in many African countries presents a massive opportunity for formal retailers. Yet tapping into that opportunity comes with challenges.

Woolworths has a presence in 11 countries outside of South Africa. According to Disberry, only about 20% of Woolworths’ African operations are food stores, while the majority sell clothing.

“It’s purely on the basis of where can we sustain our core chain to deliver the quality products that Woolworths customers expect. So our food markets are those countries bordering South Africa plus Zambia, which we can also access easily from an infrastructure point of view,” Disberry told How we made it in Africa.

The majority of food products in Woolworths’ African stores are exported from South Africa. “In some areas, our products are prohibited from being imported, in which case we have strived to find local production capability. But getting the right quality with consistent capability to a business of scale like ours is a challenge and it is going to take us a long time to build that infrastructure.”

Disberry noted that, in South Africa, it took Woolworths nearly 30 years to build the value chain the business now relies on. For other African countries, the same can be expected.

“So I do think that this will require nothing less… than a complete transformation of the value chain, in terms of the effectiveness of our ability to produce, to harvest, to store, to process and to reach our markets much more consistently and faster than we do currently.”

She added that increased local procurement of food products in Africa would also reduce the cost of getting produce to market, as well as the amount of waste experienced through transportation.

A regional approach is key

For retail companies expanding in Africa, Disberry said that a regional approach could reduce the challenges faced in transport and logistics infrastructure and help get products to market faster, more cost-effectively and reduce waste.

“Africa cannot be managed as individual countries and I think with regard to policy, the extent to which regionalisation can help us shouldn’t be underestimated,” she emphasised.

Woolworths will be opening two more food stores in September in Namibia’s capital, Windhoek. The company is also expanding its food operations in Zambia and Mozambique.

“I was just in Mozambique this week and there are huge opportunities there so I think you will see a lot more from Woolworths on the foods front, but again we are sticking with the footprint that we have today,” continued Disberry. “Until we have got a more localised supply base in Africa, it has to be produce or products that we can supply from South Africa.”

In November 2013, Woolworths announced that it would be pulling out of its three stores in Nigeria, a mere year and a half after it first entered the market.

When asked how the brand plans to avoid a repeat of this in other African markets, Disberry said the company hopes to improve customer engagement and understanding with the introduction of the Woolworths rewards loyalty programme, which has been piloted in countries like Zambia and Mauritius.

“I think that will be the most important thing for the Woolworths business going forward. That will also help us talk to our customers directly, allow them to give us feedback and really help build our business in terms of getting the right products and services to the customers in that country.”