“In failure there are many lessons to be learned,” says Sam Gichuru, co-founder and CEO of Nairobi-based startup accelerator Nailab. 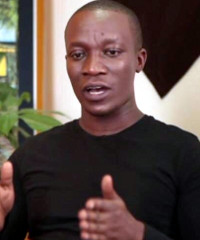 After working in the telecoms industry for three years, Gichuru started his first business at age 23. The venture however didn’t work out. For the next eight years he launched “a couple” of other businesses most of which also failed.

The Kenyan entrepreneur tells How we made it in Africa that he “made too many mistakes” in his earlier ventures partly because he had no one to train or mentor him.

“I made the mistakes most business people make [like] I invested too much or went into a field that nobody was interested in,” says Gichuru.

He notes that one of his companies went bust while he was on honeymoon because the business didn’t have the right structures in place for his employees to carry on while he was away.

At one point Gichuru went back to formal employment, then to university but he dropped out after two years to give entrepreneurship another shot.

It was then that he teamed up with crowdfunding platform 1%Club founders Anna Chojnacka and Bart Lacroix to start Nailab (Nairobi Incubation Lab). The startup accelerator established four years ago offers young technology entrepreneurs support by providing business advice, technical training and mentoring as well as linkages to investors.

Gichuru says Nailab seeks to enable hard working people to “not waste the eight years I wasted myself figuring business out”.

“By helping them cut down on the mistakes, [we] could make it [quicker] for them to launch a business and be successful.”

About 35 startups have gone through the incubation programme at Nailab, some of which have created jobs, scaled their operations, attracted investor funding and are generating revenues.

As an early stage investor, Nailab takes a 10% stake in each of its startups. However, it is yet to exit any of its investments.

Lessons from his failures

Gichuru explains that arrogance is one of the reasons why his earlier businesses failed.

“At the age of 23… you think you know everything [and] you think you have it figured out. Arrogance extends to the fact that you don’t seek advice as much as you should. You build products based on what you think is going to work but then the customer rejects it.”

He says not putting in place proper structures to ensure the business can run in the absence of the founder or CEO is also common among early stage entrepreneurs and often leads to failure. Having a culture where people can exercise creativity is critical to ensuring business continuity and innovation.

“You will discover today the culture at Nailab is everybody runs departments in their own different way. In my first business I ran everything. I was a little bit of a perfectionist,” he recounts. “I am the guy who knew everything so everybody had to do it my way. They didn’t know what to do when I was away.”

Nonetheless, Gichuru would like to see some failure among startups.

“What we want to beat is the perception that when you fail you are a joker. You shouldn’t stop trying. It’s just that you should be wiser. This is my strong conviction. You are not going to make something great the first time, or the second time, but you are going to be great making it because with every experience you become better and better.”