“The great explosion in private equity, if it is going to occur anywhere around the world in the next couple of years, is probably going to be in Africa, particularly sub-Saharan Africa, where the penetration rate is about one-twelfth or so of what it is in the United States.” 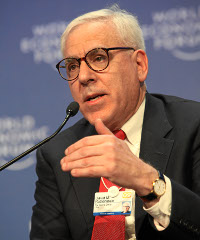 David Rubenstein, co-founder of the Carlyle Group, expects private equity in Africa to take off.

This is what David Rubenstein, co-CEO of US-based private equity player The Carlyle Group, said at the US-Africa Leaders Summit held this week in Washington DC.

According to Rubenstein, private equity has been the fastest growing industry within financial services over the past 30 years, jumping from about US$3bn under management to $3.5tr worldwide. However, Africa has not played a major part in this growth.

Yet Rubenstein thinks the opportunities in Africa for private equity are “far greater than people thought years ago”. Other than high economic growth rates, a young population and an expanding middle class, Rubenstein said another appeal of Africa for Carlyle is the low penetration rate of private equity.

“Typically we like to go where there isn’t a large penetration rate because that means there is not that much competition.”

This low penetration rate can lead to more competitively priced deals. According to the Bright Africa 2014 report released by South African-based RisCura, around 40% of the African private equity deals that took place from 2006-2013 were priced under 5x EBITDA (a company’s earnings before interest, taxes, depreciation, and amortisation). In comparison, only about 20% of all global deals took place within this lower price grouping.

“In general it can be seen that African deals are more common in lower price groupings than globally where 40% of deals are priced in excess of 7.5x EBITDA,” states the report, adding that the lower pricing for African deals is due to a number of factors, such as higher risk perceptions and lower debt availability in African markets.

“Any emerging market by definition is going to be somewhat riskier than let’s say the United States,” said Rubenstein. “But the theory is if you take greater risks in business you are likely to get greater rewards. So the reason why we and other firms are investing in emerging markets, so called, is because of the higher growth rates, the lower penetration of private equity, and the opportunities to get younger companies and have them grow.”

Africa’s richest man Aliko Dangote recently partnered with Carlyle as well as another leading private equity firm, the Blackstone Group, to invest in energy infrastructure in Nigeria and Africa.

The Carlyle Sub-Saharan Africa Fund closed in April at $698m, almost $200m above its original target of $500m. The fund is expected to invest in sectors such as consumer goods, logistics, financial services and telecommunications, and has already made investments in a Tanzanian-based supply chain manger and in a Mozambican logistics company. Dangote and the African Development Bank were two of the fund’s local anchor investors.

However, private equity infrastructure does need to be developed for the industry to take off on the continent. “You need to have other firms doing this because you have to convince the sellers of assets, the financiers of assets, the people in the financial service industry, that this is a worthwhile undertaking,” continued Rubenstein.

“So we think the industry will take off in Africa, and we now think that probably the growth rate in private equity in Africa will probably be greater than it will be in any other part of the world. [But] it will take time.”