“The attractiveness of urban areas is one of the things investors look at before they make a decision on where to invest.” 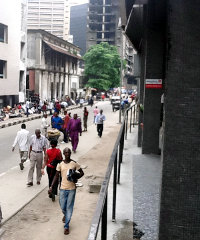 Lagos, Nigeria. It is estimated that over 60% of Africans will live in urban areas by 2050.

“Avoid building urban ghettos and concrete jungles … Africa has a chance; you have a clean sheet,” Negatu noted.

It is estimated that around 40% of Africans currently live in urban areas, making Africa more urbanised than India, and slightly less urbanised than China. According to Standard Bank analyst Simon Freemantle, “2030 will be the tipping point whereby more Africans will reside in urban than rural areas for the first time in the continent’s history.” By 2050 it is expected that more than 60% of Africans will be urbanised.

Negatu said that there is a “wall of money getting ready to come to Africa” but that countries should address issues such as the quality of life and healthcare in cities. “Even investors who are coming from emerging markets are starting to be picky where they want to locate their investments. And one of the things [they consider] is the quality of life in these urban centres.”

“I travel to the Middle East, especially to Dubai, every few weeks … Dubai, which is in the middle of the desert, is greener than many African urban cities … We want to build these big towers, without understanding the importance of making [cities] liveable. In Africa, the green stuff grows by itself, in Dubai they have to water it with machines …” said Negatu.

According to Negatu, African governments should also focus on building multiple urban centres throughout their countries. “In Africa, growth has to be sustainable, it has to be equitable, it has to be spread out … If you look at the United States, it has grown by creating multiple urban areas around the [country] … In many parts of Africa you have one huge city, but nothing else outside of the city. The wealth cannot be distributed evenly and it doesn’t help sustain the kind of economic growth that people are looking for.”

He suggested that Africa should create incentives for investment outside of the major cities.