While the continent has seen increased trade with global powerhouses such as China and India, Africa’s formal trade flows are generally hampered by poor infrastructure and bureaucratic systems that lead to long delays at ports and borders, and increase transportation costs. 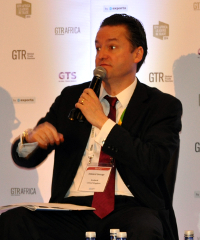 The sophistication of the Somali-led informal network is remarkable, said Ecobank’s head of research, Edward George.

Furthermore, formal regional trade within Africa remains the lowest in the world.

Compared with trade between borders in Europe (around 70%) and Asia (50%), intra-African trade averaged around a measly 10-12% over the past decade, according to the United Nations Economic Commission for Africa (UNECA).

However, according to Ecobank’s head of research, Edward George, formal trade paints a very small picture of overall trade flows on the continent, with informal trade being comparatively innovative. And one example of this can be seen in illicit Somali trade across East and Central Africa.

During a presentation at the Africa Trade & Export Finance Conference held in Cape Town last week, George said large volumes of goods transported across the Indian Ocean often do not make it to their destination ports of Mombasa and Dar es Salaam. In many instances these goods end up at Somali ports – particularly Bosaso, Kismayo and Mogadishu – where they then enter the informal trade network.

“These flows really are the hidden underbelly of East Africa trade,” he highlighted. “There are no reliable estimates for the size of the flows, and I wouldn’t dare hazard a guess. But anyone trading goods in East Africa will tell you that the Somalis control the lion’s share of rice, palm oil, sugar, electronics, khat and many other consumer goods.”

Their trade is illicit, avoiding all taxes, regulations and embargoes. Yet, as George puts it, “the sophistication of this informal network is remarkable”. And it was a Kenyan journalist that uncovered how these goods make their way from Somalia to East Africa.

“Goods enter Somali ports and make their way to one of several refugee camps… close to the Kenyan border,” George described. “From there, Somali traders – some of whom have become millionaires – smuggle [about] 15,000 bags per day of sugar across the border, worth around US$800,000.

“This is Brazilian sugar, repackaged in Dubai, smuggled by Somalis, sold in Kenya. They also trade Pakistani rice – some of it food aid – re-exported from Dubai, but again sold in Kenya.”

To get these goods over the border, George said a “broker” is used. They are paid around $1,500 to ensure the transportation of the goods across the border based on their “relationships” with border officials. And it is estimated these “brokers” arrange for around 50 trucks carrying 1,500 tonnes of sugar to cross the border each week.

Most of this informal, or illegal, trade converges on what George describes as the “heart of Somali trading” – Eastleigh in Nairobi, or Little Mogadishu as it is also known.

“I am told the Kenyan banks with local branches in Eastleigh handle around $20m per day in cash,” he continued.

“I have actually seen a guy with a wheelbarrow pushing cash, US dollars, through the streets there. And when I said to someone, ‘Aren’t you worried that money is going to be stolen?’ he replied: ‘Do you think if someone stole that money they would be alive at the end of the day?’”

However, not all of this Somali-led trade is made up of food and consumer goods. Weapons and drugs are also trafficked, and the illegal nature of these flows mean that some traders are tied up with Somali pirates and possibly even Al-Shabaab, George noted. For this reason, governments have been trying to clamp down on informal flows – with not much success.

But George argued this is the wrong approach.

“We should not be seeking to stamp out these trade flows. These trade flows provide a livelihood for millions of Africans and they are remarkably innovative, resilient and effective at getting goods to where they are needed.”

And for many Somali traders, the volume of goods – and even cash – is too big to handle informally. For this reason, George believes the solution lies not in shutting down Somali-led trade, but in providing “genuine incentives” for traders to formalise. This way, trade can be regulated, quality-controlled and taxed.

“Only then can its more pernicious qualities be cut out,” he concluded.