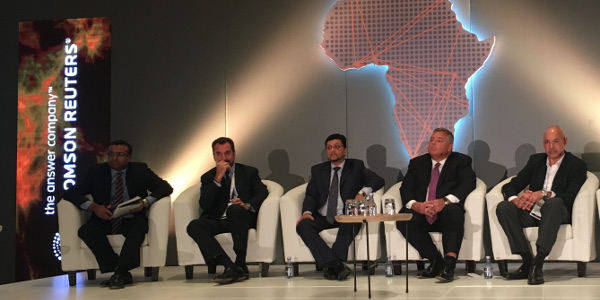 “We have the unenviable task of being the panel [standing between this audience] and Minister Gordhan, and I think it’s quite fitting, because the theme of this session is what is top of mind for leaders across the African continent.”

This was how Euvin Naidoo, partner and MD at Boston Consulting Group, opened the panel titled, “What is keeping Africa’s Business Leaders up at Night,” at the Thomson Reuters Africa Summit in Cape Town on Friday.

Naidoo was referring to South Africa’s finance minister, who would address the audience via Skype shortly afterwards – one of his first public appearances since being charged with fraud by South Africa’s National Prosecuting Authority earlier that week.

The charges are widely seen as unfounded, and the move jeopardises the chances of South Africa being able to avoid a downgrade to junk status by ratings agencies Standard & Poor’s, Fitch and Moody’s.

The role of government when it comes to investment on the continent was a prevalent theme among the panellists. David Tarimo, director of PwC Tanzania, spoke about the findings of the company’s Africa Business Agenda report, which show a disproportionate level of concern among African CEOs – compared to those around the world – when it comes to over-regulation and a lack of trust in business.

“As someone practicing in a tax arena, you know in Africa you really don’t know what’s coming down the track tomorrow,” he added.

For this reason, he explained, the current state of Africa is, “…neither the 20-year-ago begging bowl of Africa, nor is it the China of the future, one-way bet – it’s something of a hybrid in-between.”

Investment, so long as it’s long-term

While Geoffrey White, CEO of logistics company Agility, was positive about African markets when it comes to investment, he stressed the need for improved logistics across the continent.

“The reality is the logistics network across Africa needs a huge amount of investment. It needs new ports, new roads, new airports, new railways. And that’s coming, but it’s coming slowly and that’s fundamental for the development and growth. And processes also need to improve and can improve quite quickly, just given a government will and communication to make cross-border trade easier.”

White described Africa as “…leading the world as somewhere you should be investing in if you have a five-, ten-year, twenty-year profile to build a real business and a sustainable business.”

The view that the continent is attractive when it comes to long-term investment was shared by Coleman, who said, “There’s no doubt that this continent has fundamental long-term appeal because of the consumer story; because of the natural resources story; potential for productive labour that is relatively inexpensive in the world and therefore potential for industrialisation and manufacturing, particularly in the context of China becoming more expensive.”

Naidoo concluded by asking the panellists about the biggest opportunities they see. For Coleman, it is technology, especially when it comes to energy, as well as countries that are focusing on “exceptional management”, of which Ethiopia and Rwanda were two.

PwC’s Tarimo sees infrastructure investment as the greatest opportunity, adding that there are also many local companies that are managing to exploit issues that multinationals seem unable to. White agreed, noting that basic consumer needs was one of the things being tackled effectively by local players.