Large coastal megacities, a decline in the importance of agriculture, and a South Africa that is no longer a resource-rich economy. 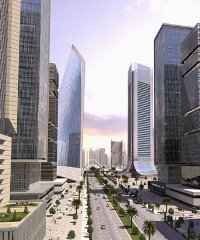 An artist’s impression of Lagos’s new Eko Atlantic City development, currently being built on land reclaimed from the Atlantic Ocean. According to the AfDB, 65% of the continent’s population will live in cities by 2060.

This might be Africa’s reality in 50 years’ time, according to a recent report by the African Development Bank (AfDB).

Although the Bank concedes that it is difficult to make accurate projections of the continent’s future, its says the following four scenarios are highly likely.

By 2060, the majority of Africans will live in urban areas. It is expected that 65% of the continent’s population will reside in cities, up from the current 40%. East Africa is projected to remain the least urbanised, while it is possible that Central Africa will overtake Southern Africa by 2050.

“Rapid urbanisation will occur in response to rising demographic pressure, a likely deterioration in agricultural productivity . . . and reduced costs of migration. By 2060, much of the population of Africa will be in coastal megacities, as in Asia and Latin America. Some migration will be international, from the landlocked countries to coastal ones; some will be internal,” notes the report.

Urbanisation will put significant pressure on the existing infrastructure of African cities. Providing new city dwellers with access to land and basic services delivery will also prove to be major challenges.

“Population mobility has been a permanent feature of African history, and is likely to increase,” says the report.

Increased connectivity through mobile phones and the internet will boost migration because people will be more informed about destination countries. Better communication will also reduce the psychological impact of migrating, as it will be easier for migrants to stay in touch with family and friends at home.

Climate change may also increase the need to move from the worst affected areas, either to cities within Africa or outside the continent.

Although the majority of African migrants will remain within the continent, many will relocate to Western nations. In 2060, it is expected that in the US and Europe, 32% of the population will be aged 60 or older. In the absence of an increase in fertility in the West, immigration will be necessary to maintain an acceptable labour force/pensioner ratio. Africa has the potential to supply much of this labour.

Despite the potential negative effects of the migration of highly skilled workers, sometimes called the “brain drain”, it does hold certain benefits for African countries. One of the greatest advantages is the remittances they send back home. Between 1990 and 2010, reported remittance inflows to Africa quadrupled, reaching nearly US$40 billion last year, equivalent to 2.6% of Africa’s gross domestic product (GDP) in 2009. Actual remittances are expected to be significantly more than this figure.

Agriculture will decline in importance

Climate change will benefit farming in the northern hemisphere, while having a negative impact on African agriculture. “Rain-fed African agriculture is considerably more climate sensitive than agriculture elsewhere, and soil degradation will have substantially increased due to the population pressure. By 2060, there will be a significant decrease in suitable rain-fed land and in the production potential for cereals,” says the report.

According to the AfDB, it is possible that Africa’s overall economic growth could decline by around 3% every year, due to the effect of climate change on farming. The annual fall in economic growth due to lower agricultural output will be about 6% in Southern Africa, 4% in North Africa, and 2% in East Africa. Asia will only see a 1.2% decline in growth, while Europe and North America will experience slight gains.

Natural resources will remain important, but locations will shift

By 2060, many of Africa’s current mines will have been stripped of their assets. According to the AfDB, this does not necessarily mean that the continent will earn less in natural resource revenues, but “rather that these opportunities will have shifted in both location and composition”.

It is expected that South Africa, currently one of the continent’s top miners, will move from being a resource-rich country to a resource-scarce, coastal economy. Although South Africa in general has good infrastructure, this is more concentrated around the mining industry, hundreds of kilometres from the coast. “Industrialisation will depend upon integrating into global markets and so will cluster at the major ports of Durban, Cape Town and East London. Both infrastructure and housing will need to be built up in these locations.”

On the other hand, some African countries that are currently not major oil and mineral producers, will become so because of new discoveries and changing global demand.