“Well I guess that with South Africa going on a slightly, let’s call it a go-slow, it is actually pretty good for the continent because Africa used to be viewed as ‘South Africa and the rest’.” 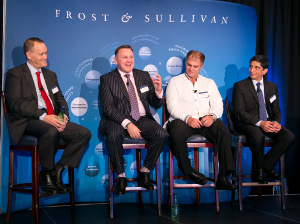 It’s been a rough year for South Africa. The country, which had been experiencing an average growth rate of approximately 5% between 2004 and 2007, has been suffering under a weakening currency, service delivery protests, and lengthy labour strikes.

South Africa holds over 80% of the world’s platinum reserves, and was particularly hurt in the first half of the year when close to 70,000 platinum miners participated in a five month strike. Statistics South Africa reported that GDP decreased by 0.6% in the first quarter of 2014, after an increase of 3.8% during the last quarter of 2013, with the mining and quarrying industry being a major contributor to the drop.

Towards end July, the International Monetary Fund (IMF) cut the economic growth forecast for this year to 1.7%, from 2.3% estimated in April. In comparison, the entire economy of sub-Saharan Africa is expected to grow at 5.4%. And on top of this, in April South Africa lost its long-standing title as the continent’s largest economy to Nigeria.

At Frost & Sullivan’s annual Africa event, a panel of business leaders debated the impact that a weakening South African economy has on the rest of the continent.

According to Malan, a struggling South African economy matched with impressive growth rates across the continent is shifting the spotlight onto other African markets in terms of foreign investment.

Charles Brewer, managing director for sub-Saharan Africa at DHL Express, added South Africa is also no longer considered the only gateway market into Africa, and today there is significantly more choice. South Africa also lacks proximity to attractive regions such as West Africa and East Africa, compared to other strengthening African markets. “It’s a long way from here to Senegal. It’s a long way from here to Côte d’Ivoire.”

However, Brewer noted South Africa is still considered an easier business environment for international companies looking at a first port of call for Africa. The country has more developed supporting infrastructure and a robust financial sector. “Nigeria is very exciting. Ethiopia is very exciting. Kenya and Tanzania are all very exciting, but they are tough places.”

Chris Whelan, CEO of Accelerate Cape Town, argued it benefits the continent as a whole to have as many attractive markets for foreign investment as possible. The stronger individual African economies are, the better the continent can compete in the global sphere. “I am not sure that you improve the performance of your team by weakening one of the players, so I don’t think a weak South Africa is good for Africa,” noted Whelan.

However, South African businesses are benefiting from stronger growth rates across the continent, notes Gert Schoonbee, managing director of T-Systems in South Africa. “We should celebrate that the rest of Africa has the growth rates that it has, and let’s not pull them down. Let’s lean into it… and that’s what most of the companies are doing. South Africa is still the third largest investment country into Africa.”

Good things among the growth pains

“There are a lot of good things still happening in South Africa,” commented Sunil Joshi, managing director and CEO of Neotel. “Yes we have our challenges. South Africa is a 20-year young nation. It is going through growth pains like many other nations are. But it has a huge history behind it and that is where it stands today. Nobody can change that.”

South Africa is still suffering under the socio-economic effects of apartheid, and much of the protests and labour unrest can be linked to the large income disparities that still exist. According to the World Economic Forum’s 2013-2014 Global Competitiveness Report, out of 148 countries assessed, South Africa ranks last in terms of labour-employer relations.

Joshi added it is up to South Africa’s business community to find ways of becoming more productive, especially with its ability to export to compete with other nations within the BRICS economic grouping.

“Now with the dollar exchange rate having gone south for South Africa, it’s actually a blessing in disguise. If we can take advantage of it, we will actually be able to export so much more because our goods are much more competitive.”

“South Africa has yet to find a way to harness the potential benefits of manufacturing, which accounts for only 13% of jobs and 15% of GDP, figures much lower than in other emerging countries,” states the report.

During Frost & Sullivan’s panel discussion, Whelan commented that South Africa needs to “play hard at what it’s good at”, and move forward.

“We have gone through a tremendous struggle in the country. We are still a very fractured society, but it feels a little bit like the rest of the world has moved on… We need to be very clear about what we are good at and go after it relentlessly. Not through arrogance, not through pride, but through justifiable confidence in certain sectors,” emphasised Whelan.