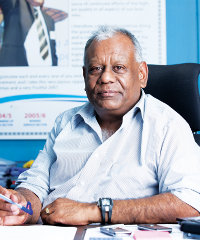 In the September 21 attack the lives of many families were ruined, hundreds of people suffered life-changing injuries, and businesses lost millions of dollars.

Chris Getonga was at the mall on that fateful Saturday just a few minutes before the attack. Getonga is the founder, and was then CEO, of Mimosa Pharmacy, a retailer with seven branches within high-end malls. One of its stores was located at Westgate.

Getonga and his wife had planned to attend a party that afternoon so he went to the mall to buy a gift.

“There were long queues at Nakumatt supermarket so I decided to go home. At the time my wife was in a building next to Westgate,” Getonga recalls. “A few minutes later as I was driving into my compound my wife called screaming and asking where I was.

“She was driving near Westgate and had heard an explosion. Soon my staff at Westgate also started calling talking about gunshots. Events unfolded fast and we realised something terrible was going on.”

Getonga drove back to Westgate and camped outside the mall. He kept in touch with his four staff members who were trapped inside. At about 5:30pm, nearly five hours after gunmen stormed the mall shooting indiscriminately, Mimosa Pharmacy employees and six shoppers who were hiding at the store were rescued.

“I regained contact with my staff outside the mall. All were badly shaken but thankfully not physically injured,” he says

The Westgate shop was one of Mimosa’s flagship stores. Over the last 12 months Getonga says business has been “difficult”.

“It was our second biggest outlet and made up 27% of our total business. This business is about cash flow so when you don’t have cash, things get tough. The Westgate store was bringing in about Ksh.13m ($146,000) a month; one year down the line that is Ksh.150m ($1.69m) that we have not banked.

“Yet we have the same staff, the same overheads and a robust head office.”

Although the Mimosa Pharmacy store was not damaged in the attack, some of its stock was looted. In the first month after the attack Getonga says both financiers and suppliers were “very sympathetic”, but later everyone started asking when they would get paid.

Kenya’s tourism industry is often the first casualty in the event of a terrorist attack and this time was no different. Tourists cancelled their holidays and hotels were forced to lay off staff, even shut down.

Getonga says he had already built two stores at the Kenyan cost. The stores were opened about a month after the Westgate attack.

“When tourism started suffering it become even more difficult. Even our employees were beginning to get nervous,” says Getonga “Our suppliers have been patient, but patience runs thin.”

Renowned entrepreneur Terry Mungai was in Malaysia for the Miss World beauty pageant when the Westgate attack happened. Mungai holds the franchise for the annual beauty pageant in Kenya and owns Ashleys Kenya Limited, a company which operates 11 high-end salon and beauty shops in Nairobi and Mombasa.

Ashleys Kenya operated a store at the Westgate mall. Three of the staff suffered serious gun and shrapnel injuries and are still undergoing treatment. Hairdresser Rachel Muraya had her right foot amputated and to date lives with pieces of metal in her body from a grenade blast. Virginia Jeanny, another salon employee, suffered back and leg injuries while Suzanne Njuguna lost her ability to speak.

“I thank God that we did not lose anybody. However, our three staff who were injured are still struggling with health complications. And despite undergoing therapy Suzanne has not been able to speak a word up to today due to trauma,” says Mungai.

Ashleys opened another outlet at a new mall in an upscale suburb in Nairobi and most of its Westgate employees were moved there. However, the business has struggled financially. The chain of executive salons and barbershops lost Ksh.12m ($135,000) in the attack and is still waiting for the government to honour its pledge to compensate investors.

“It was a devastating loss of income. The store in Westgate was fantastic. In fact it was our best performing outlet. The attack has been a huge blow to the business,” she adds.

Ashleys was still repaying a loan it took to set up its store at Westgate. Nonetheless there was comfort in knowing all the staff walked out alive.

“When I look at people who had businesses there and did not walk out. My staff survived yet many of their colleagues who also worked at Westgate died, that sobers me up. You don’t concentrate on your losses. I was so engrossed on what next for my staff, as opposed to looking at my financial losses, and that focus was what kept me going.”

The Nairobi Java House operated two stores at the Westgate mall during the attack. The company runs 25 coffee shops, one pizza outlet and five frozen yoghurt shops in Kenya and Uganda. Nairobi Java House CEO Kevin Ashley was outside the country on September 21 but had to fly back immediately.

Although the attack affected his business he says what matters most is that employees at the Java and Planet Yoghurt outlets got out alive.

“Unfortunately many of those who died or were injured were our customers. They just didn’t happen to be at Java or Planet Yoghurt that day.”

In the aftermath he says his employees were helped to cope with the emotional impact.

“My office was used as a counseling centre. In this entire floor (at the Java headquarters) we had Red Cross volunteers counsel all our staff. We then gave them time to rest and when they returned they joined other branches. And the staff there were sensitive enough not to ask too many questions. They have all integrated quite well.”

Strategic plans were also hampered. An equity sale, planned to happen in 2013, was delayed after its store, which made up 11% of total, was burnt to ashes.

“The attack on the branch had a big dent on our operations and related elements. However, we have picked ourselves up and made a resolve to soldier on confidently. Our customers have provided a much needed support system that enabled us to commence and set off on this recovery path,” says Shah.

‘The innocence is gone’

Kevin Ashley says shoppers’ habits have changed since the attack, adding that most people don’t spend as much time in shopping malls as they did before.

“It’s going to take a long time for us to heal from that attack. The innocence is gone. People no longer experience this city from an entertainment or hospitality point of view in the same way. There just isn’t that level of confidence to go about their lives the way they used to.”

But despite it all, Mimosa Pharmacy founder Getonga says investors shouldn’t write off Kenya noting that opportunities here are “not worth ignoring”. Earlier this month private equity fund Catalyst Principal Partners announced it was acquiring a stake in Mimosa.

Some other businesses that were affected by the attack have since established themselves elsewhere, but Mungai says there is one more store she can’t wait to open.

“We are waiting for the Westgate mall to reopen so we can take Ashleys there again.”