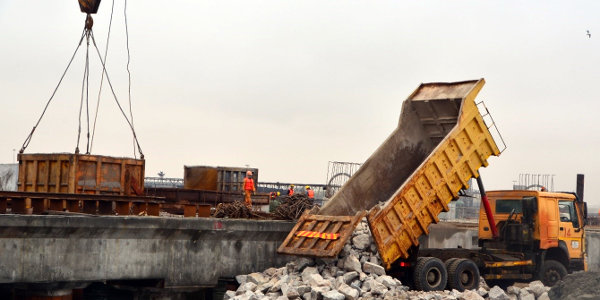 Construction work at the Port of Walvis Bay

It was in the late-nineties when former Namibian President, Sam Nujoma, began discussions around the initial plans for the US$618m twin projects at the port town of Walvis Bay.

Fast-forward two decades, to July 2017, and there is a sense of anxiety as Namibia Ports Authority (Namport) CEO Bisey Uirab and port engineer Elzevir Gelderbloem wait to receive their guest.

At 88, the visitor to the port still looks sharp, but a bit shorter than he did during the liberation struggle as he led the country towards independence in 1990. What also remains the same is his signature infectious smile, broad and welcoming. You would mistake him to be the host.

Nujoma is in town to visit the sites of the new container terminal and oil storage facility at the Port of Walvis Bay.

It is rare that the founding father of the Namibian nation makes public appearances. Nujoma has, as age catches up with him, limited his appearances to national events and seldom makes a public speech. But on this very day, Nujoma sees firsthand the progress on the container terminal, being built by Chinese company China Harbour Engineering Company (CHEC) on reclaimed land. Later, he will tour the oil storage project, which includes berthing for oil tankers, a pipeline to transfer crude, and a tank farm with oil storage capacity of 75,000 cubic metres. 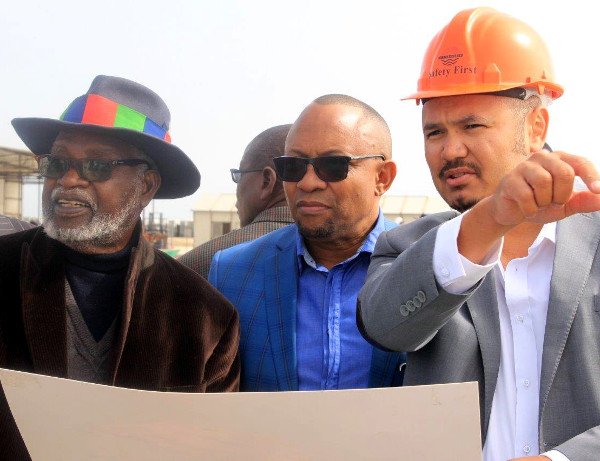 The oil storage terminal is but one part of the huge new north port development, located 6km from the south port. The north port sits on 1,330 ha of land, and five times that much in the water area, whereas the existing south port only has access to 150 ha, which includes the newly-reclaimed 40 ha. Subsequent phases of the north port programme will include facilities for handling liquefied natural gas (LNG) and dry bulk, ship repair yards, multi-purpose terminals and much more, all to cater for anticipated port capacity demand over the coming decades.

The port development was launched in 2005, the year that Nujoma stepped down, but Namport only commenced with construction work almost a decade later in 2014. However, the project is now nearing completion.

“All the bored piles construction work, which is one of the most difficult jobs, is nearly completed. The dredging and reclamation work is also completed. Nearly all the other works needed to complete the project have already commenced. We are in the final stages,” said Feng Yanfei, the CHEC project manager.

As of July 2017, about two-thirds of the new container terminal had been completed. Dredging and reclamation are 97% finished, leaving mostly civil and building works, which are expected to be done by the end of 2018. The following picture summarises the various activities and their respective progress. 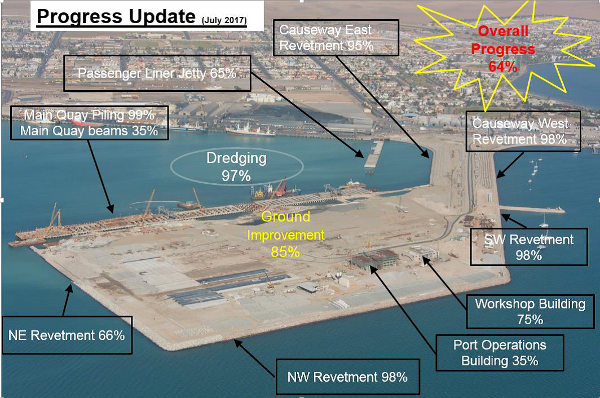 “If you invite me for the inauguration, I will definitely come,” said Nujoma, further expressing satisfaction with what he was witnessing, adding, “What you are doing is key to the sustainability of our nation.”

Already some entities in Botswana, Zambia and Zimbabwe consider it the nearest and fastest trade gateway to global markets.

Namport is expected to handle more copper from Zambia and the Democratic Republic of the Congo (DRC). Both countries are among the top-10 copper producers in the world.

The expectations of Namport customers, which are predominantly major shipping lines, continue to focus on productivity, reliability, efficiency, and cost effectiveness.

The trend towards mega ships is also here to stay. “This is a burden on our ports as they have to heavily invest in infrastructure to accommodate such larger vessels with no guaranteed return on investment nor increase in volumes. In addition, larger vessels equate to fewer vessel calls resulting in business peaks,” added Uirab.

In recent years, Namport cargo volumes have sharply declined with the concomitant decrease in revenue, but at the same time operating costs are increasing. “As a port, we deal with a lot of economies along the west coast of Africa, more especially the oil-reliant economy of Angola which has been seriously affected by the drop in the oil price resulting in a drastic reduction in imports through the Port of Walvis Bay to Angola,” he said.

Walvis Bay also competes for the same hinterland business – cargo to and from Zambia, Zimbabwe, Botswana and the DRC – as other ports in the Southern African Development Community (SADC) region.

This, according to Uirab, has led to Namport ensuring that its port infrastructure is on par, if not better, than the competition.

“In this stressful time of a marked downturn in business, our dilemma is to strike a balance between satisfying the expectations of the various stakeholders and ensuring we sustain a healthy balance sheet and cash flows. More importantly, we must strive to maintain and improve our port of call status in Southern Africa and continue to provide a strong foundation for the establishment of the Namibia logistics hub,” he said.

Xu Yuqing, the CHEC deputy project manager, weighed in: “We believe that the container terminal on reclaimed land project will change the way the country does business with its Southern African neighbours. It will greatly increase the throughput capacity of the Port of Walvis Bay, which is already rated as one of the most efficient ports in Africa. This will greatly benefit the economies of the landlocked countries of Southern Africa and in turn that of Namibia.”