What started as a small training institution offering basic computer literacy courses in Tanzania 16 years ago has grown to become a multinational offering a wide variety of services across 23 countries globally. Now headquartered in Nairobi, Techno Brain builds software solutions for governments, NGOs and private companies. It continues to offer training in addition to business process outsourcing (BPO) services. 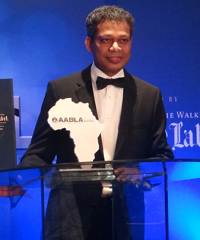 When he was tapped to start the company Manoj Shanker had just quit his job in India. The company where he worked had been taken over and he was concerned about “uncertainties” that lay ahead. And although he was offered another position in Singapore he could not get a work permit.

“A severe economic crisis” was then sweeping parts of Asia, and some countries froze work permits for foreigners to protect local jobs.

“I had to choose between looking for a job in India or to do something dramatic like going to Tanzania. I did not know much about Tanzania other than that it was in Africa where there is good wildlife. I came with a very suspicious mindset, but I wanted to do something different. I was also motivated because I am big fan of wildlife,” he recalls.

After 16 years living and working in East Africa, Shanker now considers the region his home, noting he does not “connect as much with India” anymore. “I have tasted success here,” he explains.

Shanker describes how he came to Africa as a “pleasant accident”. One of the things he noticed when he started working in Tanzania were the gaps in the technology industry. There were few homegrown companies and most jobs went to foreign companies which quoted highly inflated prices. But it is the potential of the youth he trained that was the “biggest game changer”.

“I started realising that young Africans are very smart. That was my biggest game changer because to build a great technology company you need people. Those we were training were quick to grasp things and they were ambitious.”

Techno Brain has built numerous IT solutions, and software currently contributes to about 90% of its annual turnover. In 2008 the company started offering BPO services which Shanker says are increasingly in demand as firms such as big banks and telecommunication operators seek high-level customer service.

But he and his team are not done just yet. Over the next decade, the group intends to expand its product portfolio and have a presence in 70% to 80% of Africa. Currently, Techno Brain is in 19 African countries and was recently named one of the 50 fastest-growing technology companies on the continent by professional services firm Deloitte.

Despite the success it has achieved, Shanker says the growth could have been more than double were it not for the unlevel playing field. He laments that in many African countries contracts still go to foreign companies even though local companies have the capacity and are fairly priced.

“Even today a lot of big business goes to ‘briefcase companies’ that do not exist” and the procurement processes need to be more transparent.
“If you asked me what is the biggest risk to our business I would say corruption. Out of every 100 tenders which we bid for, we lose 96. The 4% that we win are complex, difficult projects where we compete against big players across the world, and most times the projects are funded by development agencies so there is a certain amount of scrutiny and transparency.

“But I should stress that not all government agencies are corrupt,” he says.

The company has also faced challenges in geographical expansion. He notes there is no “magic wand” that assures one of success in a new foreign market, but wherever it ventures to, Techno Brain takes a long-term approach.

“What we have is staying power. We are very resilient. Even now when South Sudan is going through a crisis we still have an office and a team of four there. Ultimately when things become okay the government and customers see that you were there and that you stood with them.

“If we went into countries with a short-term outlook, with thoughts of leaving when facing the slightest challenge, we would not have grown this big,” he concludes.