Last month US President Barack Obama removed Swaziland as a beneficiary of the African Growth and Opportunity Act (AGOA) due to violation of terms with regard to worker rights. According to the Brookings Institution, Swaziland’s exports to the US have averaged over US$100m a year since the beginning of AGOA, mostly in the apparel sector. 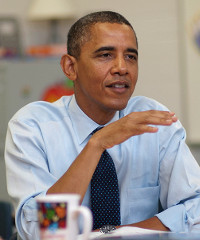 AGOA is a US trade preference that allows duty-free entry for a wide range of African products into the US. Just under 40 sub-Saharan African countries are currently beneficiaries of AGOA.

As a unilateral trade concession, the US determines which countries are eligible to be part of AGOA. Beneficiary status can be granted, or withdrawn, at the discretion of the US President and sub-Saharan African countries have no recourse to dispute decisions. Eligibility requirements include conditions that government policies and practices promote democracy and market openness.

Last month Obama also reinstated Madagascar’s eligibility for AGOA after it formed a democratic government. Madagascar was removed from AGOA in 2010 following a 2009 coup d’état.

While AGOA has been extended a couple of times since being signed into law in 2000, it is set to expire in September 2015 and it is still uncertain whether it will be renewed again. The US-Africa Leaders Summit, held in Washington next week, is expected to address the topic of AGOA’s extension as well as some key concerns surrounding the Act.

Majority of AGOA imports are oil

One of the goals of AGOA is to boost and diversify African exports to the US. In 2013 African imports under AGOA was more than four times the amount in 2001.

However, the vast majority of AGOA imports are petroleum products, holding a massive 86% share last year. Nigeria is the top exporter to the US under AGOA, mainly in crude oil, with exports totalling $11.7bn in 2013. Angola is in second place with $8.7bn, also predominately oil.

South Africa is the third largest AGOA exporter (at $8.5bn), but is the largest non-oil AGOA beneficiary with exports mainly being in vehicles and parts, iron/steel, fruit and nuts.

Chad ($2.6bn) and the Republic of the Congo ($1.2bn) are in fourth and fifth places respectively, again mostly in crude oil exports.

So where is the diversity?

On Tuesday, US Trade Representative Michael Froman said in a speech that more needed to be done to help countries take advantage of AGOA.

“Perhaps the clearest lesson from AGOA over the past 14 years is that market access — while important — simply isn’t enough. For sub-Saharan Africa to deliver on the promise of being an emerging economy, we must deal with the supply side constraints that infringe on Africa’s ability to compete and integrate successfully in the global trading system… Tariff preferences are not enough, we must address the impact of surrounding constraints.”

During a panel discussion at the UCT Graduate School of Business in Cape Town this week, US Consular General Erica J. Barks-Ruggles said although AGOA oil exports dominate, there has been growth in non-oil products.

She added that the US also provides some assistance to help grow other sub-Saharan African industries.

“This is something that people don’t focus on. AGOA contains provisions where we provide… technical capacity building efforts in sub-Saharan Africa to help them take advantage of this preference, this give-away programme which has actually hurt American manufacturers,” she stated.

“This isn’t a free trade agreement where we demand the lowering of barriers. It’s a give away, and we are providing assistance to take advantage of it.”

However, Africa is not the only one benefitting from AGOA, according to Chris Wood, researcher at the South African Institute of International Affairs (SAIIA).

“At the end of the day, United States isn’t giving AGOA to Africa to be generous or as a gift. It’s a strategic investment and building a partnership with the fastest growing continent in the world, and I think we need to be [aware] of that and remember that we do have some position within this relationship and we need to leverage that as much as possible.”

Is Africa taking advantage of AGOA?

“AGOA is widely under-utilised for what it is. We aren’t taking advantage of the benefits or the advantage that it gives the continent,” continued Wood.

He added that the true measure of whether or not AGOA has been a success would be to look at jobs that wouldn’t have been created if it wasn’t for AGOA.

However, Malose Letsoalo of South Africa’s Department of Trade and Industry said more could be done by African countries to educate their industries about AGOA.

“People are aware there is AGOA but they are not quite sure how to utilise and how to access AGOA. I think that is something we should work on and try and promote awareness of AGOA to economic operators, to take advantage of it.”

US subsidies and global trade agreements

While there is potential particularly for AGOA eligible countries to take advantage of agricultural exports to the US, according to Wood, US subsidies like the recently updated Farm Bill are driving down Africa’s agricultural competitiveness.

“Unfortunately that is just the political reality. They are not going to do away with subsidies, and as long as subsidies are in place, we can have no tariffs but our products won’t be able to compete agriculturally. So perhaps a more strategic target is to look at the more value-added manufacturing,” said Wood, arguing that inadequate infrastructure and skill shortages are some of the barriers that need to be addressed.

Joshua Setipa, former CEO of the Lesotho National Development Corporation, pointed out that African countries also have to contend with global free trade negotiations, such as the Trans-Pacific Partnership (TPP) which includes Japan and Singapore, that also seek to reduce tariff barriers to the US.

There have been talks of extending AGOA for another five years, but Wood noted that African industries need a longer term extension to take better advantage of its benefits.

In a speech this week, South Africa’s Trade Minister Rob Davies requested that the US Congress considers extending AGOA for 15 years. Davies will be one of 50 African leaders attending  the US-Africa Leaders Summit next week, along with Obama, to discuss AGOA’s renewal.