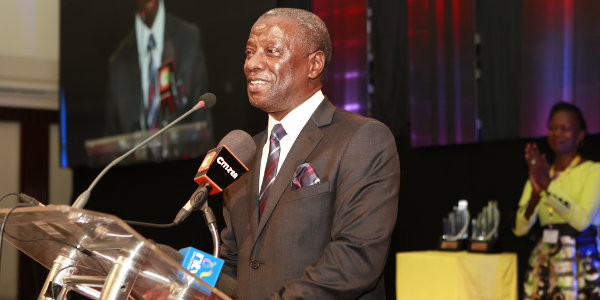 Ugandan entrepreneur Gaster Lule and his wife Edith started baking cakes from their home kitchen in the late 1970s. They were living next to a bread bakery from where they picked up the business idea. The owner of the bakery allowed the Lules to bake small cakes, commonly referred to as queen cakes, which would be sold to customers who came to buy bread at the bakery.

And so, with 2kg of wheat flour and their home oven, they started the business, often working from midnight to daybreak because there was no reliable electricity supply during the day.

Today they run Ntake Bakery, operating five production facilities across Uganda that use about 110 tonnes of flour every day to bake breads and cakes. The baked products are distributed to small retailers using Ntake’s fleet of 50 small trucks.

Last December, Gaster Lule was crowned winner in the emerging category of the EY Entrepreneur of the Year awards (Eastern Africa Chapter).

Two years after they started making queen cakes, the Lules ventured into bread production. But this was only after they had to vacate the house they were renting.

“That very good gentleman… came one day and said he wanted his house and he gave me two months to prepare myself [and move out]. I thought he was joking,” says Lule.

But when the two months lapsed Lule and his wife were forced to leave.

“I went to my father’s compound and we started again. When we were building the oven my wife said: ‘We have been making cakes and we have been seeing people lining up for bread. Are we still going for cakes, or are we now going for bread?’”

“So we decided to start baking bread,” Lule recalls.

When they started producing bread, Lule had to look for other markets in Kampala besides the nearby retailers who would come directly to the bakery.

“So I used to ride a bicycle for about 4km. I stayed on Entebbe road but I had to go to the opposite side of town. I would take bread there, then ride back with wheat flour and sugar. I did that for about six months but demand kept increasing so I started hiring a small saloon car.

“Again we kept growing so I started hiring a matatu (privately-owned minibus) and I would remove the seats at the back and put in all my boxes of bread and take it to customers.”

But the growth posed another challenge for Ntake Bakery – limited access to wheat flour. At the time, Lule says, there was only one wheat flour supplier who could not supply the quality and volumes they needed. So the next step was importing flour.

“One time my wife and I had gone to an exhibition in Germany to see if we could buy machinery to start making biscuits. One exhibitor I met there said he could sell me second-hand biscuit making machinery that was already in Kampala because the person who bought it was not doing well in business,” Lule recalls.

“I wanted to go for it, but then I thought: ‘Somebody has tried to make and sell biscuits and he’d failed. Are we angels to succeed?’

“All of a sudden we had an idea. We are importing flour, so why not start milling flour in Kampala? We met a Turkish company producing small milling flour machinery. And by the close of the exhibition we’d signed a contract to buy a machine that could mill 50 tonnes of wheat a day.”

But the demand for wheat flour was high, with even other competing bakeries coming to Lule for flour. So three years later he got a bigger machine handling 180 tonnes of per day. And the company is currently setting up another milling machine with a 300 tonnes capacity.

“We are now among the top three millers of wheat flour in Uganda,” he says.

Diversifying into other sectors

Lule said he was motivated to venture into other businesses so each of his eight children would one day have a business to manage. But he considers his investments in real estate to be insurance. Ntake Group has four commercial buildings in Uganda.

“It’s very hard to put up a building, but once it is done, that is that. You only look into your account to see if the tenants have paid. It needs very little service, and I like it very much. I call it insurance for my family.”

But Lule admits to having made some mistakes too.

A few years ago he went into the paper recycling business with an investment of US$600,000. The business failed.

“I went to China, bought a very big machine and that business has failed because I didn’t do enough research. In all the other businesses we take time to talk about it with the family, but this time I did not. I went in and I lost,” says Lule.

“Recycling waste paper in Kampala – with that one I have accepted, I failed.”

In Uganda, Lule says, opportunities are emerging for entrepreneurs building businesses that fit the changing lifestyles in the country.

“The growth in Uganda might be slightly lower, but there are changes. The lifestyle has changed. What can you offer the changing Uganda?

“If you think in that way you will succeed, because most of what the middle class now needs has not been around in the past. People building businesses along those lines are doing fine.”