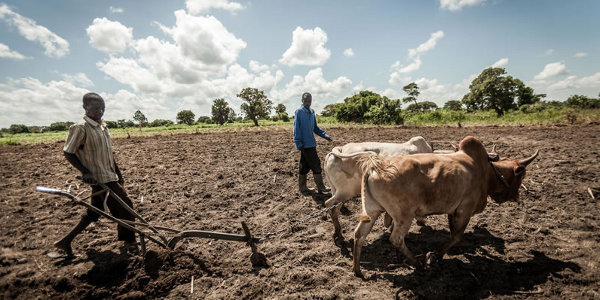 Agriculture is a dominant sector in Uganda, employing more than 70% of the country’s labour force and accounting for over half of export earnings.

The East African country has large areas of arable land, warm weather and regular rainfall that have contributed to its success in producing coffee, cotton, sugar, tea, tobacco and bananas.

“There are huge agricultural resources in Uganda, and even with minimal input the output is very good,” says Alex Elphinstone, founder and managing director of Yield Uganda, a vertically integrated agribusiness focused on the production, sourcing, processing and marketing of crops. It also works with smallholder farmers to improve their yields, crop quality and revenues.

Yield Uganda sources crops from 4,000 farmers for export to the UK, India and China. It also supplies local producers, including a major Ugandan brewery. In the last two years it has shifted around 2,000 tons of produce.

“I left because the corporate world wasn’t exciting anymore. I am passionate about the smallholder production sector, and I wanted to make a difference,” he says.

“There are a lot of inefficiencies in the smallholder sector and as a result farmers generally produce way below true agronomic potential. We would like to see farmers producing at true potential and integrated into the formal, transparent international food market.”

Small-scale farming accounts for most of Uganda’s agricultural production. But the more than three million farmers face a myriad of challenges, including limited access to credit and insurance services. They also lack technical expertise to meet the standards required from international buyers.

Companies that rely on smallholder farmers for raw materials often struggle to source the right volumes due to poor yields. Sometimes farmers default on contracts and sell produce to other buyers, leaving companies with debts and little room for legal recourse. Yield Uganda works with such companies to guarantee reliable volumes of high-quality produce from smallholders.

“The Ugandan smallholder sector has a huge opportunity in terms of formalising supply chains. The global food market is increasingly looking for traceable produce, reliable volumes and sustainably produced produce. Smallholders are generally not able to feed into those supply chains and that’s where an operator like Yield Uganda can come in and bridge that gap,” says Elphinstone.

Yield Uganda runs a farming contract scheme through which farmers are guaranteed markets and a minimum price for their crops. Its farmers mostly grow sesame seeds, white sorghum, green grams and chia seeds. The company assists farmers in the growing process by offering extension services such as training.

According to Elphinstone, rising worldwide demand for food presents an opportunity for smallholders to be even more involved in the global food chains. In Uganda though, contract farming is highly competitive, and with little focus on quality standards.

“In sourcing everybody is fighting on price only. This means producers are not incentivised to produce higher quality produce because they are not getting better prices for doing so. Businesses are also not motivated to invest in farmers, therefore farmers’ yields remain low, and Uganda is not as competitive as it could be.”

To counter this, Yield Uganda is expanding its offering to smallholder farmers to include yield-improving services such as mapping, soil testing, weather services and market intelligence. These tailored input services will make it easier for farmers to access credit and insurance.

The UK-born entrepreneur says running the business can be stressful, but doing it in Uganda is “exciting because there is a lot of opportunity”.

The experiences he acquired working with smallholder farmers for BAT in Uganda has come in handy.

“If I had come straight from UK and started the business it would have been harder. But I know the smallholder space here quite well. There are local nuances and ways of doing business which I had already learnt.”

Elphinstone is one of the entrepreneurs who recently graduated from the 2015 Village Capital FinTech for Agriculture accelerator programme, which seeks to spur growth of enterprises that offer alternative financial services to smallholder farmers in Eastern Africa.

He hopes to expand his business across East Africa and connect the region’s millions of smallholder farmers to formalised, fair and transparent markets.