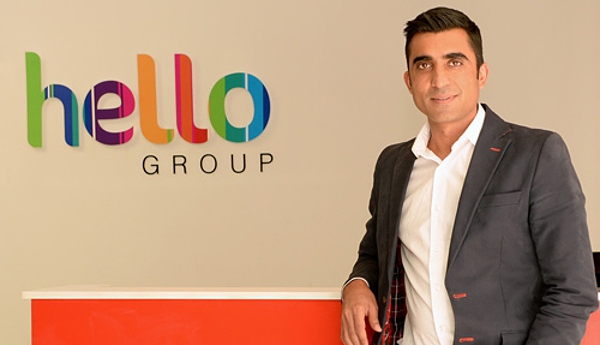 “It is all about creating value for customers. And if you can’t do that, then you shouldn’t be in business,” said Nadir Khamissa, CEO and co-founder of Hello Group.

Hello Group is a South African company that has built a sizeable business by serving millions of marginalised people. It began by offering unrivalled, low-cost international call rates to migrant communities, but has since introduced other services, such as international money transfers and travel solutions. Its Hello Mobile prepaid SIM card has near 1.5 million users, and is distributed across 45,000 street vendors in South Africa.

The company was started in 2005 by brothers Nadir and Shaazim Khamissa to combat South Africa’s high international call charges.

“We knew there was a problem that needed solving because people were being over charged – and this was at a point when I had saved quite a fair bit of money from my years working at the bank. I wanted to start something new,” explained Nadir.

“So the stars kind of aligned for us in 2005. I quit my job and started the company with my brother.”

Nadir and Shaazim, who were 26 and 21 at the time, invested all their savings into developing a prepaid calling card for an international callback service at public payphones. But after investing in the telecoms switches and printing thousands of cards, they discovered that the state-owned telecommunication agency, Telkom, had changed a key mechanism in the way that public payphones operated – which essentially made their callback solution impossible.

“Whether they did that to stop competition or for another reason, I don’t know… But I saved for five years and then lost 90% of it in one night,” Nadir recalled.

“Yet it was the best thing that could have ever happened to me because I learnt some really priceless lessons. The first was that when you are trying something new, make your experiments small so your mistakes are small, because you really don’t know what is waiting for you out there. And that has been central to what we now do at Hello Group. Whenever we try something new, we do small experiments first so that if we get them wrong, they are not going to sink the ship.”

The brothers re-evaluated their business and decided on three pillars they believed would make their solution successful in reaching their target market: it had to be low cost, easily accessible and easy to use.

They realised that a payphone callback service did not meet this criteria. For starters, payphones were scarce and generally did not offer a comfortable user experience.

“Most of these low-income migrants have jobs during the week and can only phone their families late at night or on Sundays. And they have a problem with time zones for international calls and then have to stand in a queue at the public payphone during evenings and weekends where there are often people standing behind them, listening to their conversations. There is rain, there is sunshine. It’s just not a nice experience and there is not exactly a payphone on every single corner.”

They turned their attention to mobile phones, which was beginning to take off in the low-income market. Tech-savvy Shaazim, a student at the University of Johannesburg at the time, came across Voice Over Internet Protocol (VoIP) technology, which was then still in its infancy. The duo discovered it could considerably reduce the price of international calls via mobile phones, and generate revenue through mobile value-added services. So Nadir sold his car and invested the last bit of his money into developing the mobile technology.

“We managed to reduce the price of international calls by two-thirds and make our solution easily accessible because everybody with a cellphone could use it… And the user experience was much simpler because they didn’t have to go stand at a public payphone, outside in the rain and sunshine. They could also [make calls] whenever they wanted to. So that really was a game changer,” added Nadir.

But getting these SIM cards into the hands of its migrant target market proved a challenge, as the industry’s large distributors wanted to charge exorbitant amounts. So the brothers decided to create their own distribution network and today works directly with 45,000 street vendors and 13,000 spaza shops at the bottom of the distribution chain. Hello Group designed a mobile wallet to easily handle payments to its many unbanked traders, as well as other software for the sale of airtime and electricity.

The company has also recently branched out into low-cost international money transfer, another service that the brothers saw a considerably need for in its target market. Hello Group was granted an independent money transfer operator licence from the South African Reserve Bank and last year launched its Hello Paisa product, which already has around 170,000 customers.

The group has also launched travel and media services targeting migrant and marginalised communities, but Nadir explained these are still in their beginning stages and not a notable business yet.

Entrepreneurship is about creating value

Hello Group has partners across various countries in Africa and Asia, and has won a number of accolades, including a EY Southern Africa World Entrepreneur Award and the Sanlam/Business Partners’ Entrepreneur of the Year awards last year. Nadir is also currently completing a three year entrepreneurial course at Harvard Business School, and has been selected to give his class’s graduation speech.

He noted that his best business decision to date has been to go into business with his brother.

“The benefit is that we understand and know each other, and there was a deep level of trust before we even did any business,” highlighted Nadir.

“I think the potential cons are that conflict can spill out into [personal life]… But we have managed to avoid that for 11 years by following a very clear philosophy of transparency. So number one, we are very clear about who owns what in the business and about whom is compensated in what way.”

And his advice to other entrepreneurs looking to target the informal market is to focus on customer needs and developing low cost quality solutions.

“It is all about creating value for customers. And if you can’t do that, then you shouldn’t be in business.”