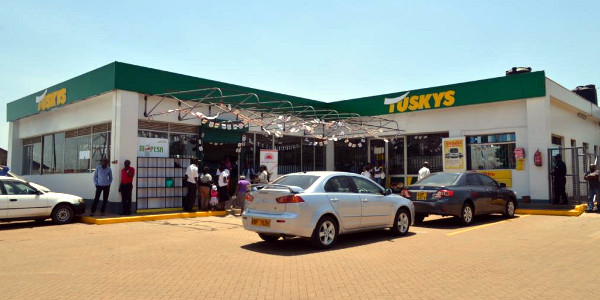 The entry of foreign supermarket chains into the Kenyan market was anticipated for years, with many curious to see what impact it would have on long-established homegrown brands. It is almost a year now since Walmart-owned South African retailer Game opened a store in Nairobi.

Dan Githua, CEO of Tusker Mattresses (Tuskys), the second-largest retailer in Kenya, says his business has not felt much of an impact.

“This is probably because we are competing on different platforms. I think people selling electronics would feel an impact [from Game’s entry], not us. But [foreign retailers] are changing the game in terms of relationships with suppliers,” adds Githua, referring to “restrictive” conditions French retailer Carrefour has set for suppliers who want to do business with it. Carrefour is set to open at two new shopping malls in Nairobi in coming weeks.

But Githua says future competition will not come from these established players.

“Five years ago competition was between the ‘big four’. “[Today] the primary competitors are tier-two stores which are coming up now – the likes of Maathai, Eastmatt [and] Saltes. Those are now our real competitors. This is because they now give as good an offering, in terms of the appearance and ambiance of the store, as we do. So competition has become different.”

Like many of these emerging retail players, Tuskys started from humble beginnings with a small shop in the town of Nakuru (about 160km from Nairobi). Today it operates 52 stores in Kenya, employing 6,000 people. It also runs seven outlets in Uganda.

“There is one thing Tuskys did that wrote its name in people’s hearts,” says Githua. “In the early 90s there were frequent shortages of flour, rice and cooking oil. Most people living in Nairobi didn’t have money to stock up, so the shortage was a serious thing. Most traders would exploit people by hiking prices during shortages. But when Tuskys came to Nairobi they never hiked prices and that made it popular.”

“Today we have two things going for us. We are affordably priced, and we go to the customer to provide convenience. People don’t think much about it, but our stores are deliberately located at the bus station. You shouldn’t have to shop, and then walk with the goods for a kilometre to take your bus. We deliberately want to provide convenience for the normal Kenyan who uses a matatu (public transport vehicle),” he explains.

In coming years, Githua says Tuskys will follow a three-pronged approach to growth. This includes rolling out a franchising model that will see small independent shops rebrand and trade as Tuskys outlets; introducing online shopping; and expanding its network of convenience stores located at Shell service stations.

This year the family-owned business plans to open seven large stores as well as 12 convenience outlets.

“We will be opening a small store within a private hospital in Nairobi,” notes Githua. “That is another model we would like to replicate. When we approached the hospital they quickly agreed. The need was there but it was not being addressed.

“It is one of the easiest deals I ever struck. Wherever there is a catchment of people who need services near them, we are going to set up there,” says Githua. “Our vision, which was written long before I joined the company, is to become a successful brand in every street and corner. Our ambition is to be ubiquitous, be everywhere in terms of presence.”

Githua estimates Kenya’s formal retail penetration stands at about 30%, leaving significant room for expansion. While some might see the growth in modern retail as a threat to informal sellers, Githua says there are opportunities for small traders to partner with Tuskys. He cites the example of a woman who used to sell chapatis (type of flat bread), outside one of Tuskys’ busiest stores in the Nairobi middle-class suburb of Buruburu.

“We approached this lady and told her we would give her some space inside our store if she maintained cleanliness, wore an apron, employed people, and ensured consistency. We had a fight at first, but we told her the only other alternative was for her to leave because she was encroaching on our parking space and we needed to use it. She reluctantly accepted. Now that lady is our supplier. She is doing more than Ksh.3m (about $29,000) a month just selling chapati. She sells 600 to 800 chapatis in the Buruburu Tuskys alone, and she has now rolled out in about eight stores,” says Githua.

“The person who sells our milk-on-tap used to be a hawker. We would see people come to Tuskys, then they would pass by this guy to buy milk. So we gave him space inside our store. Now he is doing millions selling milk and he has his own processed milk brand.

“Formal retail is the way things have to go. The economy has to be formalised. The people complaining should ask: ‘What can I do in a formalised environment?’”

Githua points to theft as one of the biggest challenges facing retailers. The Retail Trade Association of Kenya claims major retailers lose a combined Ksh.3.5bn ($34m) worth of stock annually to theft. Last year Tuskys suspended some of its employees for suspicion of working with an external cartel to illegally clear goods from one of its stores.

“Shoplifting is becoming extremely difficult. We get someone who has stolen a Kiwi shoe polish worth Ksh.40 ($0.40). Now what do you do with that guy? You take him to the police and they release him. We have hundreds of people shoplifting every day.”

The structure of Kenya’s devolved government is also an impediment for retailers seeking expansion, says Githua.

“Distribution has become a nightmare. All manufacturers are in Nairobi, so taking goods out of Nairobi to other areas upcountry is difficult. We now have to pay so many taxes along the way,” he says.