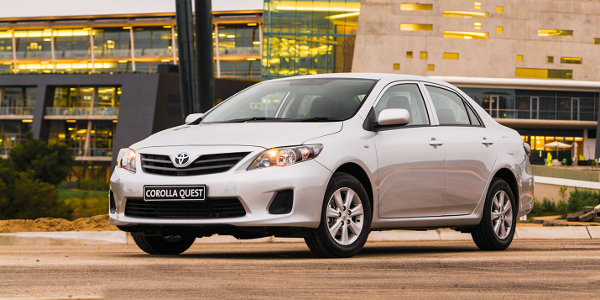 During January, ‘CNN Marketplace Africa’ is airing a series of episodes featuring four of the biggest global brands in Africa. Each week, the programme focuses on operations of a brand on the ground, showing how it deals with infrastructural and logistical challenges that exist on the continent, and how it positions its brand to appeal to African consumers.

This week the Toyota brand is examined.

Some 46 years after the Corolla first went into production, the car is more popular than ever. It is the world’s best-selling car with over 40 million sold worldwide and more than one million in South Africa.

“Currently we sell about 1,000 units a month on this model… This model is extremely popular in the rental business and for private individuals out there,” says Leon Theron, the general manager of technical services at Toyota South Africa.

Recognising the popularity of the Corolla in South Africa, Toyota reworked the car to cater directly to the needs of the local consumer. “This vehicle is locally produced and a lot of it is locally designed, which is phenomenal, it’s a true South African car. There is a big demand with people saying give us a car with a good size that’s affordable and that’s what we did,” explains Theron.

Despite Corolla’s popularity, critics say there is room for improvement. Mark Smyth, Business Day motoring editor tells ‘Marketplace Africa’: “I don’t think there’s been a sexy Corolla since the days of the old Rxi 6 speed… Akio Toyoda says now Toyota needs to be cool again and I think that’s what Toyota South Africa and Africa also needs to do.”

Emphasising the design elements which have made the Corolla such a success, Theron says: “If you had to compare Corolla to its competitors people would say it doesn’t look as stylish, as modern. But if you look at the DNA of the Corolla and you look at its design and under-skin engineering, that’s what separates us from the rest, they’re indestructible.”

In February 2016, Toyota is set to release a new generation of 4×4 Hilux cars. “A lot of people very excited about it – it’s a major contender in the bakkie wars,” notes Smyth.

On the new release, Theron says: “When you mention a Hilux and you talk about a Corolla, the South African people know what you’re talking about. They’ve become legends in their own right.”

In the FaceTime element of ‘Marketplace Africa’, host Eleni Giokos meets Johan Van Zyl, CEO of Toyota operations in Africa and Europe who discusses the company’s expansion on the African continent.

Van Zyl identifies the target audience of Toyota in Africa: “We’re looking at the affordable market. You know the customer profile is quite interesting because it’s more family, but also fleet cars because people with businesses are buying it.”

On Toyota’s African operations, Van Zyl reveals: “Africa is a growing market. We have distribution in all 54 countries.”

The Hilux is manufactured in Toyota’s plant in Durban, South Africa, which supplies the African continent and some European markets.

“Our production capacity is 220,000 per year. We’ve never utilised our full capacity, but there’s some capacity for opportunity, we’ve been running at capacity for 180,000… We have a world-class facility in Durban,” says Van Zyl.

“I’m an African myself. Africans are like any other consumer. They want to buy a good quality. Of course affordability is important, but quality is very important. Like anywhere in the world our philosophy is that we must give our customer in Africa exactly the same experience from buying experience that we give any other people in the world, so they deserve the best and therefore we must give them the best. African consumers are informed consumers like anywhere else in the world. They do have access to information, the internet. It’s growing. People are informed and I think people will be quite impressed to see how informed they really are.”

Van Zyl explains the strategy behind Toyota’s catering to the specific market in South Africa: “We’ve decided, affordability is very important in the market and we have developed specific vehicles for that market. For example, we’ve developed Toyota Quest in South Africa, which is a lower priced vehicle with excellent specifications. The size of the vehicle accommodates the market for the consumer with a little more space and the vehicles have been doing very well. We are not just selling it in South Africa, we are exporting it to the rest of Africa and we’ve been doing that for quite some time. Our first product we developed was the Taz, which also sold very well, it was a hatchback vehicle. In this case the Corolla Quest is a sedan and that is a product specifically for the African market.”

“Toyota is in Africa for the future. Some of the markets are mature already and are doing very well, like South Africa, Botswana and Namibia. Those markets are well developed. There are big opportunities in Africa. When we think of Africa we must not think of the Africa today, but the Africa of the future,” adds Van Zyl.