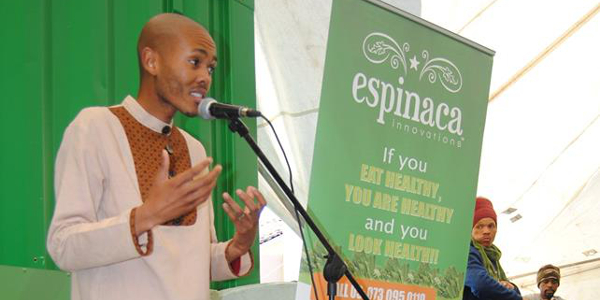 Lufefe Nomjana (also known as the Spinach King) is the 28-year-old South African entrepreneur building a business empire around spinach in the Cape Town township of Khayelitsha.

His company, Espinaca Innovations, runs its own bakery from a renovated shipping container and produces spinach bread, as well as other spinach-based products like muffins and sandwiches, for Spar (a local retailer) outlets around Cape Town. It also has its own bicycle delivery service to supply local offices and consumers with healthy meals.

This month the business launched its second café and bakery, located in the Khayelitsha Mall, through a sponsorship from health club group, Virgin Active. And it is also set to open a new factory in August. Here Nomjana plans to scale production of his ‘banting bread’ – a low carbohydrate alternative to traditional bread – which has become particularly popular among Cape Town consumers.

Making do with what you have

Nomjana recalls how he started in 2012 with just R40 (US$2.60) in his pocket. He had been volunteering at a community garden and noticed a large supply of spinach. He Googled a few recipes and found spinach bread was both tasty and nutritious. Nomjana convinced a neighbour to let him use her oven and, with that, he baked his first loaf.

Nomjana always had an entrepreneurial mind and has been involved in various businesses since school. So he quickly saw an opportunity to sell the healthy spinach bread in his community. However, after months of pitching his idea to investors – with no luck – he realised he would have to make do with the resources he had.

“And what did I have? It was brains, R40, a neighbour that had an oven and a bunch of spinach from the community garden,” Nomjana tells How we made it in Africa.

His neighbour allowed him to use her oven at night, in exchange for paying the electricity costs and supplying her with spinach bread.

Keeping up with demand

Nomjana started baking four loaves every night, which he sold during the day. He then moved to producing eight, and later 16 – which was the maximum he could produce per night. Each loaf was sold for R10 ($0.65), but he wasn’t making any profit as his costs were amounting to about R9.80 a loaf. However, he was developing a reputation and soon found he could not keep up with supply.

“Back then it was not about profits. I was building the brand, and actually educating people about [healthy eating],” he explains.

In 2013 he approached a manager at Spar and asked to temporarily use the ovens at a local outlet on condition that he would also supply the grocer. His capacity immediately jumped to 200 loaves a day, and Nomjana also started supplying other baked spinach products to local offices.

He hired a handful of sales people and offered them commission on every unit sold, but noticed that sales were hampered by the time taken to deliver on foot. So he started an online crowdsourcing campaign and before long raised enough funds for five delivery bicycles as well as branded t-shirts.

In 2014 Nomjana won the SAB Innovation Award, along with R90,000 (almost $6,000). He used the award money, together with his savings, to purchase baking equipment and a renovated shipping container which he turned into a bakery. This had been Nomjana’s vision for the company since the day he baked his first spinach bread.

Today he produces around 500 loaves a day, along with other baked goods, and sources his organic spinach from local farmers. 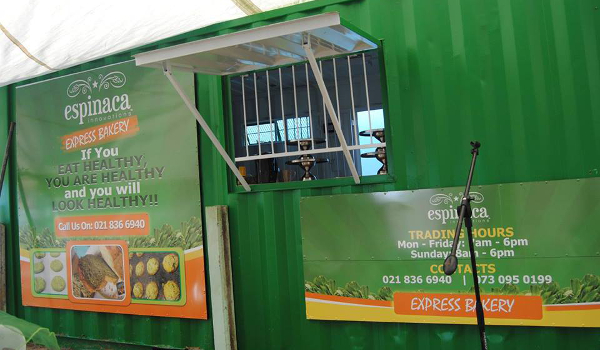 In 2014 Lufefe Nomjana renovated a shipping container and turned it into a bakery.

However, he notes there is opportunity to scale production to 2,000 loaves, and is planning to open a factory in the nearby town of Stellenbosch in the next few months. From there he hopes to supply nationally and, eventually, to other bordering markets.

His recently-opened second outlet is both a bakery and café where consumers can buy affordable healthy meals. For example, two slices of gluten-free spinach bread and a cup of fresh butternut soup will cost them around R15 ($1).

“And R15 is nothing in the township,” highlights Nomjana.

Nomjana says his story is evidence that entrepreneurs do not need huge amounts of capital to start a business. He advises other aspiring businesspeople to first identify the resources they have at their disposal and then figure out how to use them.

“Life is about having something to give in order for you to receive. And what is it that you have? You’ve got the brains, the intellectual capital and that will actually open many doors for you. So the first capital that you need, more than money, is intellectual capital.”