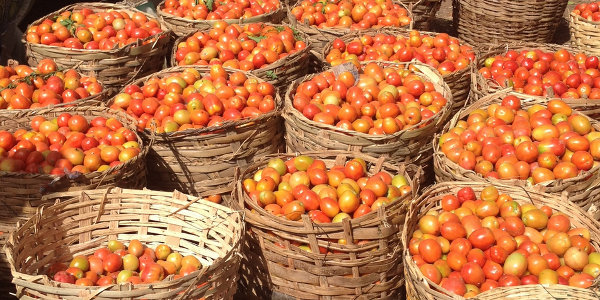 Nigeria is sub-Saharan Africa’s largest grower of tomatoes, but it is also the biggest importer of tomato paste.

This month, Nigeria’s largest tomato paste manufacturer, Erisco Foods, announced that it would close its 1,500-worker strong factory in Lagos’s industrial area Oregun, and move production to China. It will then import its finished products back into Nigeria – a process that is cheaper than manufacturing locally, says Erisco CEO, Chief Eric Umeofia.

According to reports, the decision followed a 30-day ultimatum sent by Erisco’s management to the Nigerian government to completely ban the importation of tomato paste into the country. Umeofia has accused the Central Bank of Nigeria (CBN) of allowing importers access to foreign currency to import the finished product, despite tomato paste being on the CBN’s list of 41 items banned from accessing foreign exchange for importation.

In addition, Umeofia says that the company has struggled to access its own reserves of foreign currency to import the necessary machinery, spare parts and raw materials to continue local production. He claims this has resulted in a loss of over ₦3.6bn (US$11m).

“The CBN refused to give us approval to date to use our own deposit of $460,000 generated from our foreign operations, but approves forex to importers of finished tomato paste into Nigeria. So how can we – the indigenous manufacturers – compete in the current business climate?”

Umeofia further accuses the CBN of providing a more favourable exchange rate of ₦280/$1 to some importers, while Erisco has had to source forex from the unofficial/parallel market at an exchange rate of over ₦450/$1.

“It is saddening and painful that we have started the process of relocating our factory out of the country, thereby forcing us against our wish to create jobs in foreign lands,” he was quoted saying in Nigeria’s Vanguard newspaper.

Erisco’s management did not respond to How we made it in Africa‘s requests for comment.

Oil exports make up most of Nigeria’s government revenue, and the collapsed crude prices – which lost almost 60% in value over two years – quickly led to a shortage of dollars in the country. It wasn’t long before foreign companies, including South African packaging company Nampak, reported troubles converting their naira profits into dollars. Spanish airline Iberia and America’s United Airlines were forced to completely shut down operations in the country.

In June 2016, the CBN decided to abandon the naira’s peg to the dollar – which had been fastened at just below ₦200/$1 since March 2015 – in an attempt to reduce dollar liquidity shortages.

However, Thierry Mbimi, partner and head of financial risk management KPMG Nigeria, notes that the move has not solved the forex crisis – and the local manufacturing sector has been a major casualty.

“The instability and inadequate supply of forex have made it extremely difficult to source forex for the importation of raw materials. This has led to a harsh environment for businesses to operate in, as the cost of production continues to rise, ultimately resulting to the shutdown of some affected companies, like Erisco. This is evident in the recently published GDP figures. As at the third quarter, the manufacturing sector contracted by 4.38% year-on-year.”

He adds that the rising cost of doing business and sourcing foreign exchange have made local manufacturers less able to compete with international companies.

According to research by Seki Mutukwa, frontier markets analyst at Renaissance Capital, imported raw materials for local manufacturing range between 30% and 50% of the cost of goods. And unlike some large multinationals, Nigerian companies do not have the benefit of being able to source materials overseas with the aid of parent company liabilities.

“Difficulties are compounded by the fact that the policies – fiscal and monetary – are very volatile… lacking any sense of direction and confidence,” continues Mbimi.

“It boils down to the highly fragmented foreign exchange market, because of the liquidity situation. In fact, there are about 10 different exchange rates being used, depending on what you are using it for,” Nonyane explains.

She adds that there is a large gap between the parallel market’s street value and the official exchange rate for US dollars. This could also be a side effect of the CBN’s ban on official foreign exchange access for certain imported items – these importers now have to source foreign currencies from bureau de changes on the parallel market, driving up the unofficial rate.

“So it is a combination of a shortage of liquidity, as well as weak policy response. There is no clear signal from the central bank regarding where the rate is going, its plans for the exchange rate – whether they going to devalue further, or going to call in the IMF. No one really knows.”

For Charles Robertson, global chief economist at Renaissance Capital, the solution lies in allowing the further devaluation of the naira.

“A currency at a realistic value – the unofficial market is around ₦450-500/$1 – would make imports more expensive, and support local manufacturing and Nigerian jobs,” he says.