Sandwiched between West Africa’s economic powerhouses Nigeria and Ghana, lies the tiny country of Togo. Despite its relatively small size and a population of just under 7m, Togo has become a key trading and transport hub for the West and Central African region. 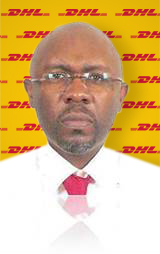 He notes that traders from countries such as Gabon, Equatorial Guinea, Cameroon and the Congo come to Lomé to buy goods, and then ship them on to their home markets. He says these businesspeople prefer to buy products in Togo rather than travel all the way to Europe where they are not familiar with the business environment.

The port of Lomé also serves as an entry point for goods destined for landlocked countries such as Burkina Faso, Niger and Mali. Miko notes that the town of Cinkassé, right on Togo’s border with Burkina Faso, has become important from a trading perspective, so much so that DHL is now considering opening a branch in the town.

“All the goods that move to Togo’s neighbouring countries go through Cinkassé. I’m about to write a business case for DHL to have a small branch over there, because there is a lot of business. We have a lot of people coming from Cinkassé to ship with DHL in Lomé, and it is more than 600km away. The banks and the oil distribution companies are already over there. There is a need in terms of logistics transportation in the area.”

In addition, Lomé is positioning itself as an air transport hub for the region. ASKY Airlines, which launched its first flights in 2010, has its base at Lomé Airport. ASKY has a partnership with Ethiopian Airlines and currently flies to over 20 destinations, including Brazil. Lomé airport is undergoing a multi-million dollar modernisation and expansion to cope with growing demand.

Road infrastructure has also been upgraded in recent years. “The quality of the roads used to be very bad, but lately there has been an improvement. In Lomé, for instance, the roads are being well maintained. There have also been improvements in the rest of the country.”

Living and working in Togo

Following 15 years of economic stagnation (1990-2005) due to socio-political issues, Togo has achieved continual growth since 2007. It is estimated that the economy grew by about 5% in 2013.

However, foreign businesspeople shouldn’t expect an easy ride in Togo, as competition in many sectors is heating up. Miko says this can squeeze margins and require companies to fight harder for business. He notes that it can take him two days to close a sale that would have taken 15 minutes in a country such as Equatorial Guinea.

In terms of doing business, Miko says businesspeople must carefully study the market and costs involved. It is also important to appoint the right people and to remain optimistic during challenging times.

Originally from Cameroon, Miko says one of the best things about living in Togo is the good security. It is the African country where he has felt the safest. “In Togo you have women riding bikes at one o’clock in the morning. It is extremely secure.”