The Uqalo Consumer Index is a valuation index based on the historical price-earnings ratio (PE) of listed consumer businesses in sub-Saharan Africa. The index is intended to give investors and businesses an indication of current valuation expectations. 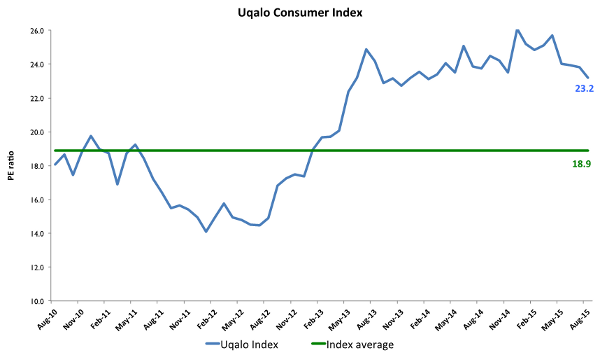 Our most recent index, based on data at the end of August, has fallen to 23.2x which is its lowest level since March 2014. Disappointing results from a number of prominent Nigerian consumer stocks are primarily to blame for the fall.

Both Cadbury and PZ Cussons reported an 8% decline in revenues whilst Cadbury also reported an overall loss in profits for the period. The revenue decline can be attributed to the headwinds facing the Nigerian consumer. Insecurity in the north of the country, naira depreciation and general consumer uncertainty are to blame. The currency weakness and the concomitant increase in inflation have resulted in a lower disposable income for consumers.

Add to this the uncertainty arising from CBN regulations banning certain imports and the delays in the announcement of cabinet ministers, the Nigerian consumer is likely to remain in a fragile state for the foreseeable future.

The announcement of poor results has caused the Cadbury share price to halve in value over a two-month period whilst the PZ Cussons share price is down as much at 40% from recent highs.

Despite the share prices of the a number of Nigerian consumer companies coming under pressure, valuations are still stretched and our Uqalo Consumer Index remains 23% above the long-term average.