“The most successful companies in the consumer sector in Africa are the ones that really create an affinity with the consumer by being the brand of the people.” 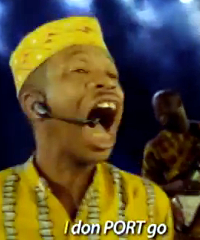 This is according to Michael Wood, founder and director of business consulting company Aperio, which focuses on accelerating growth of FMCG brands in sub-Saharan Africa.

One way companies can do this is through working with a local celebrities to endorse their product or brand.

“So if you can provide them with someone that they want to aspire to, then some kind of celebrity endorsement or recommendation can work.”

Nigeria’s ‘Saka wars’: the case of MTN vs Etisalat

One memorable example of how celebrity endorsements can be powerful is seen in MTN’s ‘poaching’ of rival company Etisalat’s spokesperson. Hafiz Oyetoro (popularly referred to as Saka) is a well-known Nigerian actor and comedian and was the celebrity face for Etisalat.

However, when the Nigerian government introduced Mobile Number Portability (MNP) in the country in 2013, MTN reportedly offered Oyetoro a ₦20m (US$100,000) deal to become its celebrity endorser. MNP for the first time allowed Nigerians to switch over to another mobile service provider while retaining their existing mobile phone number, in a process called ‘porting’.

Oyetoro’s ‘I don port’ TV commercial for MTN, began with him wearing clothes that appeared green (Etisalat’s brand colour) and as he sang a catchy song about ‘porting’ over to MTN, the lighting shone on him to reveal he was wearing yellow clothes (MTN’s brand colour).

“This was really very powerful because everybody knew him and that he was [previously] the spokesperson for Etisalat, and most people had heard about the new laws that allowed them to switch service providers. It created a lot of hype,” Wood recalled.

“It was quite a bold move [by MTN] but a good move in terms of connecting with consumers and getting the message out there.”

But word-of-mouth is still king

However, Wood said often the most powerful form of marketing in Africa is still word-of-mouth. He therefore advises companies and brands to invest in marketing strategies that allow consumers to test their products and services.

“Word-of-mouth within the community is often more important [than other marketing strategies],” Wood continued.

“So having a strategy around trials and key influences within the community is very important.”