China’s strong presence in Africa has come under the spotlight in recent years. Chinese firms are involved in all spheres of African economies, from infrastructure to mining and oil. However, far removed from these multi-million dollar deals is another ‘China in Africa’ – the thousands of Chinese shopkeepers that can be found from the backstreets of Luanda to the smallest farming towns in South Africa. 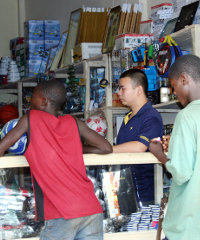 A Chinese-owned store in Burundi.

“The ‘Chinese shop’ is the opaque underbelly of China’s presence in Africa,” notes Terence McNamee, author of a groundbreaking new report by the Brenthurst Foundation. This fascinating study sheds light on the largely undocumented lives of Chinese traders in Africa. To produce the report, the Brenthurst Foundation conducted interviews with nearly 200 Chinese traders in South Africa, Lesotho, Botswana, Zambia and Angola. Here are some of the highlights.

Almost all Chinese traders are in Africa because they couldn’t make it in China. It is easier for them to make money in Africa than in their homeland.

Many of the traders interviewed bemoaned the lack of opportunities and intense competition for jobs in China.

The reasons why so many traders were unable to carve out a living in China varies, depending on their profession, the economic situation in their home province or region, and personal circumstances.

But what pulled these traders to Africa, as opposed to other regions of the world? One of the reasons is the large market for low cost Chinese goods on the continent. McNamee explains that “Africa represented a virgin market for household goods, apparel and other items that China could produce at very low cost”.

Africa draws the poorest and least educated Chinese migrants. “If they don’t make it in Africa, they have nowhere else to go,” notes the report.

“If they had a choice, they would be elsewhere, but only Africa possesses the minimal entry requirements and light regulations that enable Chinese migrants with limited capital and low levels of skills to compete.”

Very few would like to make Africa their home; most wish to return to China or resettle somewhere else than Africa. Of the Chinese traders living in Lesotho, not a single interviewee wanted to remain in the country.

The majority of Chinese traders in Southern Africa come from just one province, Fujian, home to less than 3% of China’s total population. “Networks in Fujian have been exceptional in creating opportunities that facilitate greater migration from China to African countries – both legally and illegally,” states the report.

Diminishing opportunities in Fujian have pushed many of the rural and working class to emigrate. “Aside from the loss of jobs in the manufacturing sector, agrarian reforms in China created a vast surplus of workers no longer needed in the agriculture industry; and the commercialisation of the fishing industry, coupled with the sharp rise in diesel prices, made it unprofitable for many of the province’s fishermen,” says the report.

Communities in Fujian also encourage emigration for economic reasons. Some of the economic dividends include the high amount of remittances Fujian receives.

The report found that the Fujianese people are highly competitive and territorial in nature. “Fujianese traders have been the source of considerable tensions, not least amongst the wider Chinese migrant community, who are widely critical of their approach to business, if not their character.”

All work and very little play

Chinese traders are successful in Africa due to their capacity for hardship and willingness to accept low profit margins. “Chinese traders have been known to sleep four or six to a room in extremely humble dwellings, or live in their shops to cut costs. Their hours will vary depending on the business, but generally the ethos is to work all day, 365 days of the year,” notes the report.

Many of the Chinese traders in Southern Africa are driven to make money to support their families back home. The single traders just want to make enough money to return to China and purchase a flat, without which they would not be able to find a wife and start a family. “We do everything for the next generation” is a mindset shared by many of those interviewed.

The Brenthurst Foundation’s survey paints a dreary picture of the place of Chinese traders within African societies. “Only in South Africa did traders express any sense of belonging or attachment to the country. Overwhelmingly, Chinese traders sealed themselves in cocoons, completely cut off from the local community. It is typical of the Chinese diaspora everywhere to restrict their social lives to people from their own regions and provinces.”