South African fixed-line operator, Telkom, will launch its long-awaited mobile network on Thursday, according to a report by the Sunday Times. 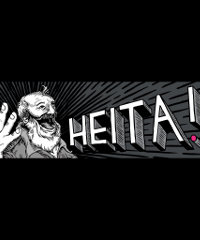 One of Telkom's "Heita!" wallpapers that can be downloaded from the campaign's website.

While the official name of the network is expected to remain a secret until the launch, Telkom has already begun a teaser marketing campaign around the word “Heita!” – township slang for “hello” or “howzit” – with billboards across the country and national television advertisements. The “Heita!” advertisements doesn’t make any direct mention of Telkom’s new mobile network.

According to the newspaper, the new mobile venture is seen as critical for Telkom’s future success as its fixed-line business has been in decline for a long time. Neotel, a new fixed-line operator, is also expected to take away many of Telkom’s existing customers.

Telkom’s acting CEO, Jeffrey Hedberg, told the Sunday Times that “we need to have mobility as part of a package that we’ll offer customers. We see it as a key element we’re going to need to have as part of any bundle we provide to the consumer.”