In November last year, South African Jolandie Rust, at age 29, became the first woman to travel around Africa on a motorbike solo. 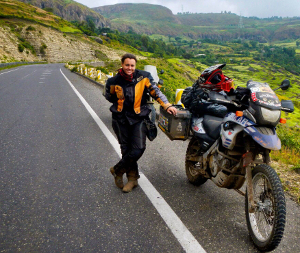 Over 40,000km across 25 African countries on a BMW 650 GS Dakar, her adventure started in the southern tip of Cape Agulhas in April 2012, headed along the continent’s western perimeter, to its most northern point in Tunisia. From there she made her way through Libya, Egypt and Sudan during a period of heightened civil unrest, and back down across the continent’s eastern rim, arriving at her starting point 20 months later.

Her experience left her with insight into travelling African borders, some strong thoughts on foreign media coverage, and an archive of beautiful and wacky stories to last her a life time.

Between 2011 and 2013, a number of African countries were embroiled in conflict and civil wars that deemed them unstable and unsafe for foreigners. But according to Rust, the images that might appear on foreign media do not always represent the reality on the ground.

Mali was the first “conflict” African country she hit, with 2012 seeing the rise of militant rebels in the north and Malian President Amadou Toumani Touré being ousted in a coup d’état.

She admits she was nervous about entering the country, especially since a South African had recently been taken hostage in Timbuktu. However, she decided to try and travel through southern Mali as quickly as possible. “So I went from Ivory Coast to Mali and ended up loving it so much that I stayed there for a month.”

While northern Mali and Timbuktu were in conflict, she could see no real impact in the south, with the general public “just going about their normal lives”.

Sudan was another country deemed as “dangerous” but according to Rust it was the country she actually felt the safest. “It was the one country I knew I could leave my bike in the street, with all my belongings on it and the keys in the ignition, and no one would touch it,” she highlighted. “And people treated me with the greatest of respect, and every now and then I was offered food or a place to stay.”

However, some media reports she had seen about Sudan did not seem to depict what she saw on the ground. “I remember seeing on the news that the situation is bad in Khartoum. And when I arrived there, nothing was happening. There is an impression you get from the news, but when you actually get there you [realise that] is not what is going on.”

One of Rust’s most surreal moments was arriving in Libya to a greeting of gunfire.

“A bunch of bikers from Tripoli had come to surprise me at the border and welcome me into the country which was awesome. But as we left the border towards Tripoli, there was a guy on the back of a truck wearing an AK-47 and he started shooting rounds off into the air as a way of welcoming me into the country. Everyone’s eyes just focused on me to see how I would react. And I remember thinking, ‘as long as he is not aiming at me, it’s fine’.”

Egypt was also undergoing civil unrest, regime changes and protests when Rust entered the country in 2013, and the effect was far more apparent. For starters, there was a 7pm curfew and she was told that she could only travel through Egypt with an armed escort, which she managed to ditch after learning the police where targets for attacks.

While the presence of tanks and barbed wire barricades revealed turmoil in Cairo, Rust explained that people seemed to be trying to go about their normal lives. “I felt pretty fine walking around. I even rode around on my own in Cairo. People were freaking out back home saying: ‘You are insane, you can’t do that, get out!’.”

She felt like the only tourist in the country, and it wasn’t long before the government caught on that she was travelling through Egypt. “They kind of started using me to almost market the country and show people that Egypt is fine to visit. Just see this girl riding through it alone.”

As she made her way through towns towards Sudan, she met government officials to attend press conferences and was even presented with medals. “It was insane. It’s like something that happens in movies… I was being treated like some kind of royal.”

The best and worst borders

Her longest border stay, however, was entering Egypt through Libya, which took nine hours – mainly due to the conflict in both countries. And the shortest? Entering Swaziland from Mozambique. “There was almost no one at that border, so it took me just five minutes to cross.”

Cheapest and most expensive countries to backpack

While Angola is said to be one of the most expensive countries in the world for tourists and expats, Rust said it depends on how one travels. While cycling through it in 2011, she avoided high accommodation costs by camping in the bush and buying food from local markets, considerably less expensive than supermarkets.