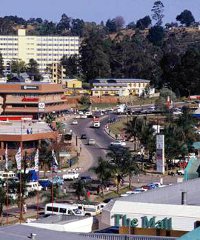 Manufacturing is the main driver of the Swazi economy, accounting for 42.3% of GDP. The sector consists primarily of four export-oriented industries: wood pulp production, drink processing, fruit canning, and sugar processing. The manufacturing sector is estimated to have expanded by 0.5% in 2008 before contracting by 4% in 2009. Projections for 2010 point to a recovery with marginal growth of 1.5%, followed by further declines in the coming years mainly attributable to the second-round effects of the global recession.

The global crisis particularly affected Swaziland’s wood and wood products sub-sector. Until the end of 2009, Usutu Pulp was both the leading wood pulp processing company and Swaziland’s largest employer, with an annual capacity to produce 220 000 tons of bleached kraft pulp. In January 2010, Sappi, the London-based management of Usutu Pulp, decided to wind up operations, with a loss of 550 jobs. Other companies in the sector also fared badly in 2009. Swazi Paper Mills closed with a loss of 223 jobs and another, Peak Timbers, retrenched half of its 170-workforce at its Piggs Peak plantation. Further job losses are likely to occur as the effects of the Usutu Pulp closure cascade through the economy. Many of the 250 or so local firms that supplied the mill may inevitably close. Similarly, it is also estimated that losses at the Swaziland Electricity Company reached SZL15.6 million (US$2.1 million) in 2009, while Swaziland Railway and other firms providing road transport services were expected to lose SZL7 million ($951,000) and SZL6 million ($816,332) in 2009, respectively.

For its part, the textile and apparel sector shed an estimated 3,000 jobs in 2009. Employment in the sector fell from 15,000 in 2008 to 12,000 by mid 2009, largely the result of falling global demand and production cuts. Even more jobs were likely to have been lost were it not for the lilangeni’s depreciation, which kept exports competitive. Swaziland’s textile and apparel sector became eligible for the African Growth and Opportunity Act (AGOA) in 2000 and qualified for the apparel provision in 2001. Subsequently, over 30,000 jobs, mostly for women, were created in the sub-sector. However, even before the ongoing global crisis, the industry experienced major setbacks in 2005-06, due to both increased global competition as a result of the end of the Agreement on Textiles and Clothing (ATC) in early 2005, and the then strong lilangeni which reduced exports.

Agriculture accounts for 80% of the Swaziland’s total land area and 70% of employment, contributing just 7% to GDP. The sector is strongly linked to the manufacturing sector. The two most important crops are sugarcane and maize both of which are grown commercially. Swazi agricultural productivity is principally a function of the country’s two-tier land tenure system: Swazi Nation Land (SNL) and Individual Tenure Farms (ITF). The former is communally owned, generally not irrigated, and is mostly used for subsistence, low-productivity agriculture. The primary SNL crops are maize, cotton and tobacco, all of which suffer from adverse weather. Productive commercial irrigated farming is generally restricted to private holdings and focuses mostly on sugarcane, citrus, timber and pineapples. It is estimated that ITF-based agriculture accounts for three-quarters of the country’s total agricultural output.

The tertiary sector, at approximately 38% of GDP is dominated by finance and banking followed by transport. The tourism sub-sector has great potential and is increasingly regarded as a source of future growth. According to the World Travel and Tourism Council (WTTC), tourism accounted for 7% of GDP in 2008 although both business and personal travel and tourism declined by 3% that year.