“You cannot be an entrepreneur for 25 years without having failures, and some of you might not realise that some of my failures were really bad. And when I mean bad, I mean I have been bankrupt more than two times.” 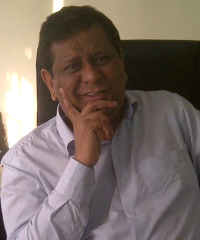 “In my experience everything that can go wrong will not just go wrong once, it will go wrong at least 10 times. So be prepared for it if you want to be an entrepreneur,” says Maneesh Garg.

So said Kenyan-born entrepreneur, Maneesh Garg, during the recent TEDxIfe event in Nigeria. He is head of his family business, Nagode Group, a Nigerian conglomerate that operates in a variety of sectors (such as chemicals, logistics and healthcare), and has an annual turnover of US$200m.

However, despite the success of the business today, Garg had to overcome significant obstacles, mostly notably bankruptcy.

Some of his low moments during these times include having his wife sleep in the car because he couldn’t afford to fix their generator, and it was the only place she could access air conditioning.

But perhaps the lowest moment for him was being placed in jail for not being able to pay his debts.

“In this environment, when you owe people money, it’s not a civil thing, it’s a criminal offence. And everybody tries to shake you down,” he explained, adding that it goes beyond just personal visits demanding repayment.

Garg recalled how he had to put on prison clothes and was then shoved into the cell where he met someone who considered himself “president of the cell”, and went by the title “His Excellency”.

“And I had to go meet His Excellency, and introduce myself to him. And then he said to me – and I still remember it very clearly today – welcome to [the land of] suffering.”

As difficult as it was at the time, Garg said the experience has toughened his mental state. His advice to aspiring entrepreneurs is to prepare for the worst – whether it is the collapse of a factory due to floods or fires, or having employees steal from the company.

“If you ask me, in my experience everything that can go wrong will not just go wrong once, it will go wrong at least 10 times. So be prepared for it if you want to be an entrepreneur.”

His own failures have also taught him what to do during times of bankruptcy and financial crisis. “The way one gets out of a big hole in business, is very simple – stop digging.”

According to Garg, the first thing an entrepreneur must do is face the “brutual facts”.

The next important step is to manage stakeholders, with staff being one of the most important.

What worked for Garg was calling a staff meeting, and very honestly and clearly explaining to them that the business is in trouble. He then presented them with the business’s action plan and also gave staff the option to leave if they wanted to.

“And of course some of them really left. That is what happens when people perceive a sinking ship.”

Another important stakeholder that needs to be managed during times of business crisis is the banks and creditors. “The strategy which I used, and I would recommend to anybody in a situation like that, is to make sure one over-communicates with them,” emphasised Garg.

“So I made it a point to communicate with them, to talk to them, and I made sure that before they called me, I called them.”

The first concern the bank managers had was that Garg might flee the country. To put their minds at rest, he invited the managers to have breakfast with him every morning. “So what worked for me was over-communication.”

“I think the most important issue with business failures is managing your own state, your emotions, your thoughts, and your own well-being,” continued Garg.

“The first thing I did, and it’s something which is a habit that I still have today, is every morning for one hour or half an hour, I would read inspirational books, or listen to some talks.”

Garg also started keeping a “gratitude journal” in which he would remind himself of what he has to be grateful for in his life.

“And somehow the gratitude journal and the inspirational stuff in the morning put me in a condition to be able to deal with all these issues and challenges in my life.”