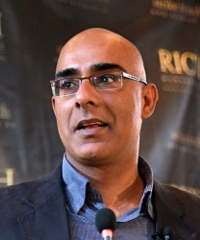 Analysts expect further growth this year with increased investment in natural resource development, technology and consumer sectors. However, Kenya-based financial analyst Aly-Khan Satchu warns that conflict in South Sudan and the presence of Al-Shabaab terrorists in Somalia pose risks to the expected accelerated growth in the region.

Satchu told How we made it in Africa that while some countries in the region are poised for accelerated growth, the neighbourhood presents “reinfection risks”.

“You look at most risks analysis around this area, the risk levels have gone higher,” said Satchu.

When South Sudan attained independence in 2005 after 22 years of conflict, entrepreneurs and companies in neighbouring East African countries flocked to the world’s youngest state seeking opportunities.

“South Sudan could fall off a cliff. Currently I don’t see a single leader in South Sudan talking about the national interests… that is what is worrying me. I think South Sudan presents a contagion risk back into Kenya and the region.”

According to Satchu, continued instability in South Sudan will have a huge impact on businesses in the region. He cited the case of KCB which is the largest bank in South Sudan. In the first nine months of 2013, South Sudan accounted for 15% of KCB’s KSh. 15.2bn (US$175m) pre-tax profits.

“The banks have gone there in a big way. Our entrepreneurs… people like you and me have invested there. The linkage is very deep and the impact is potentially very high,” said Satchu, adding that continued conflict will keep people away.

“These [investors] are pioneers. All of a sudden you are seeing the risk that you might have to get on a plane [and] leave your business. This is a problem people have had in Africa for many years. It has always been a risk and it’s got to be dealt with quickly.”

Despite these risks, Satchu said investment in technology and natural resources like oil, gas and geothermal energy will be on the rise.

“I am bullish about Africa [but] I am worried about North Africa. It is never going to be linear. There will always be bumps.”

While Africa has become more attractive to investors in the last decade, Satchu reckoned there is a need to create an enabling environment for business.

“Last year there was a general perception that foreign investors were going to [invest] come what may. Foreign investors are like you and me. They come when they can make money. If you tell them come under some condition and then you change the condition, they leave. They don’t come back,” said Satchu. “I think we got a little bit careless last year. We thought there was just a tsunami of money, we just have to open our wallet and people are going to pour it in. They are not.”

Africa, Satchu warned, should not allow complacency and should work hard to persuade people to invest in the continent.

“People have a choice to go millions of places in the world. Today people are sending their money back to the US because they think that place is starting to grow again. So we have to be careful. Let’s not be complacent. Let’s not be stupid enough to believe that people don’t have options.”