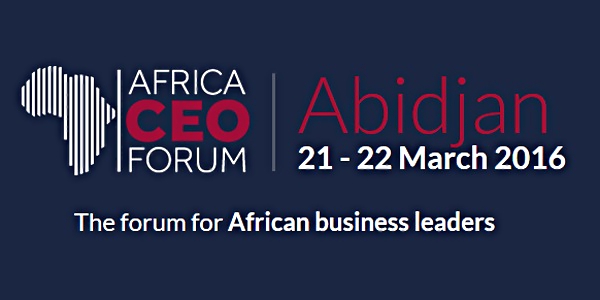 More than 800 people, including the CEOs of major African and international companies, investors and political decision-makers, will attend the event in Abidjan.

The forthcoming edition of the Africa CEO Forum, the foremost international meeting for African CEOs, bankers and investors is set to take place on 21 and 22 March 2016, in Abidjan, Côte d’Ivoire.

With attendance levels growing year-on-year (more than 800 people took part in 2015 – an increase of 18%), the Africa CEO Forum has become one of the most important events in the African business calendar, enabling participants to exchange their views and opinions on the issues affecting the economic development of the continent’s companies.

A number of leading South African CEOs are expected to attend next year’s event; their strategic priorities are reflected in the programme of thematic conferences and meetings.

Established as the foremost meeting for African and international key decision-makers and leading CEOs, the Africa CEO Forum is also a fantastic platform for networking in a high-quality African and international setting. Participants have access to a number of tools to help them make contact effectively. One such initiative is the Deal Rooms, an innovative meeting format offering attendees the opportunity to exchange ideas on their sector’s prospects and forge new partnerships. In 2015 70% of participants identified business opportunities or concluded deals.

An international event first held in Geneva in 2012, the 2016 edition of the Africa CEO Forum will take place in the financial capital of Côte d’Ivoire, the driving force of regional integration within the Economic Community of West African States (ECOWAS).

“For the forthcoming edition we have chosen a country and a region that is showing clear signs of robust economic development. The fact that the African Development Bank is based there – our partner since the first edition – was a further contributing factor,” notes Amir Ben Yahmed, founder and President of the Africa CEO Forum.

Set up in partnership with the African Development Bank, the Africa CEO Forum is an event organised jointly by Groupe Jeune Afrique, publisher of ‘Jeune Afrique’ and ‘The Africa Report’, and Rainbow Unlimited, a Swiss company specialising in economic promotion events.

As a result of the success of its 2015 edition, which played host to more than 800 African and international figures, including 500 CEOs from 43 African countries and 100 top-level speakers, the Africa CEO Forum has become the foremost event on development issues in the African private sector.