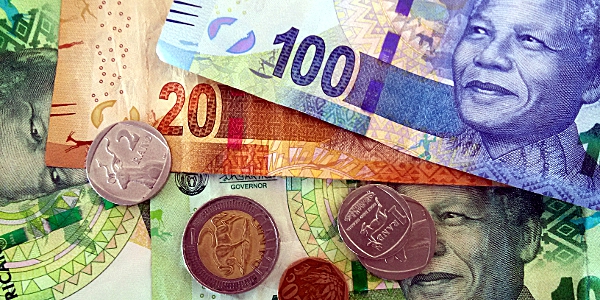 After expanding by a strong 2.5% in 2Q, South Africa’s economy is unlikely to carry as much momentum into 3Q. That’s because the rebound in private consumption is ebbing and output from the mining sector may contract. The South African Reserve Bank (SARB) may be tempted to hasten its easing to help support economic growth over the next two years, as long as consumer price inflation runs near the midpoint of its 3-6% target range.

South Africa’s real GDP expanded by 2.5% in seasonally-adjusted annualised terms in 2Q after contracting by 0.3% and 0.6% (revised from -0.7% initially) in 4Q16 and 1Q17, respectively. In year-over-year terms, the economy expanded by 1.1%, compared with 1.0% in 1Q. As expected, household expenditure was the main driver, growing by 4.7%, its strongest expansion since 2Q12. However, much of this expansion reflected a recovery in retail sales following a sharp decline in 1Q. 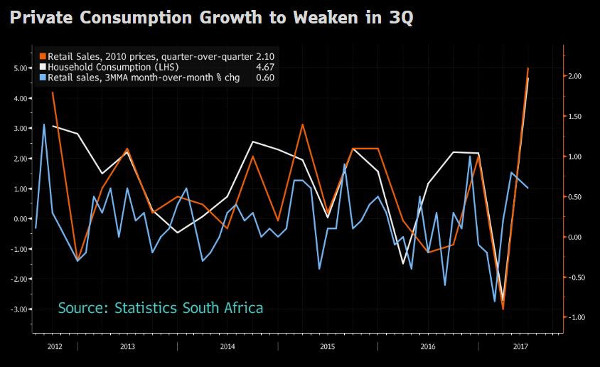 That boost probably won’t be repeated in 3Q as the increase in retail sales from February to June, the longest stretch of continuous month-over-month growth since 2010, appears to be ebbing. The 0.2% seasonally-adjusted figure recorded in June was the weakest since January. Retail sales figures for July, to be released on September. 13, may give an indication of how much private consumption growth might weaken in 3Q. A 5% dip in petrol prices, with effect from July 5, should have given retail sales a push, though increases in August and September mean this stimulus is likely to have been short-lived. 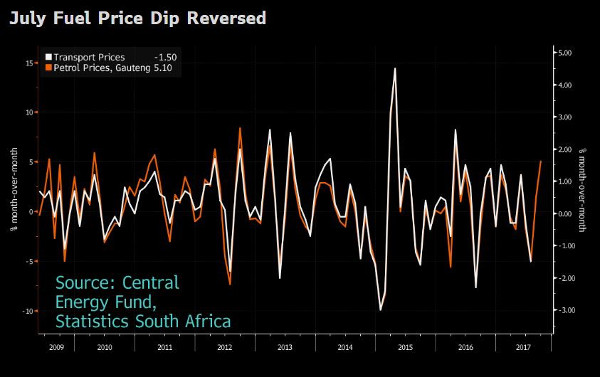 Higher transport prices imply that the dip in consumer price inflation to a five-year low of 4.6% year-over-year in July may represent its nadir. However, this depends on whether the strong agricultural performance in 2Q translates into lower food prices in 2H. The weak retail sales environment and inflation anchored near the midpoint of SARB’s 3-6% range in 2H, could spur the central bank to bring forward rate cuts. But this loosening of monetary policy won’t lift domestic demand until late 2018, at the earliest. 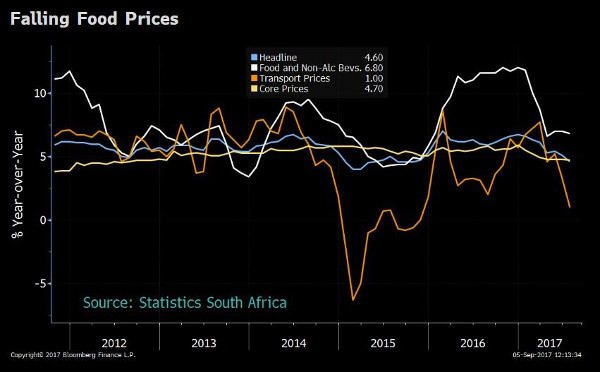 Economic growth in 2H is unlikely to get much support from expanding credit. Private sector credit growth has stalled this year at around the existing 6% rate of inflation. It will most likely need lower interest rates to return to reach its 2012-15 rate of 10%. Sentiment indices indicate that investment will remain depressed.

Two other reasons to expect weaker, or even negative growth in 3Q, stem from the contributions made by the agricultural and mining sectors. Agriculture grew by 33.6% quarter on quarter in 2Q, contributing 0.7 percentage points to headline growth following a 0.5 ppt addition in 1Q after shrinking in 2015 and 2016 because of droughts.

The mining sector grew 3.9% in 2Q after expanding 13.1% in 1Q, adding 0.3 ppt and 0.7 ppt to headline growth, respectively. BI Economics has previously explained this ramp-up in 1Q production as a need to cover overheads amid a decline in platinum prices to a decade-low. This is unsustainable. In fact, growth in the mining industry in 2Q entirely reflected a carry-over from 1Q, with monthly data showing it was on a downward trajectory throughout the quarter. 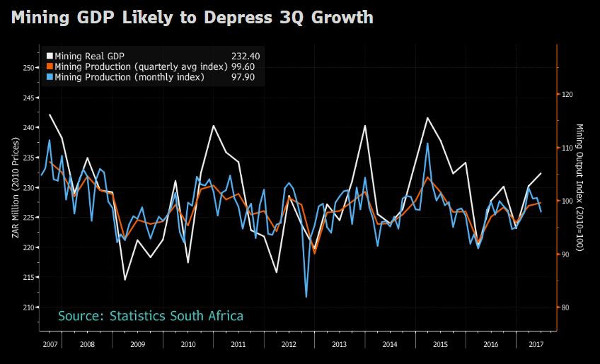 Mining production for July is to be released on September 7, but the sector looks unlikely to contribute to growth in 3Q even if there is a turnaround in the monthly figures because of the slippage through 2Q. A continued contraction in output over the medium term seems likely as large mining companies, such as Sibanye Gold, plan to pare back loss-making South African operations to improve their profitability and allow for raising capital in the market. 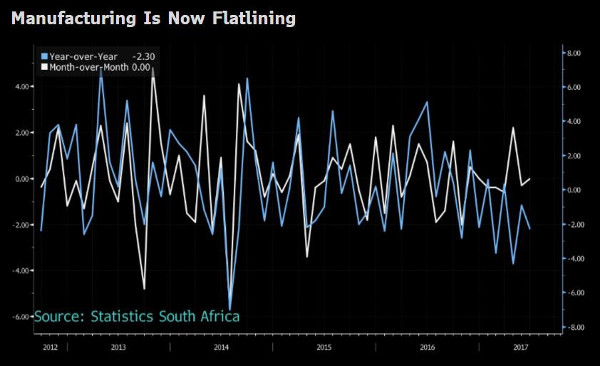 Manufacturing output figures are due for release on September 7 and may improve after a flat month-on-month reading in June. Nonetheless, the sector, which expanded 1.5% in 2Q, following contractions in the previous three quarters, is unlikely to emerge as a driver of growth in 2H. That’s because weak domestic demand will probably more than offset the potentially positive benefit of improved demand from abroad.

To sum up, the return to economic growth in 2Q is unlikely to be indicative of a marked change in fortunes for South Africa. Real GDP growth is likely to remain below the increase in the population in 2018. Weak mining, manufacturing and retail sales figures for July may prompt the SARB to reduce its 2018 real GDP growth forecast, currently at 1.2%. This would raise the odds of the central bank opting for another interest rate cut at its September 21 Monetary Policy Committee meeting.

Mark Bohlund and Jamie Murray are analysts for Bloomberg Intelligence.