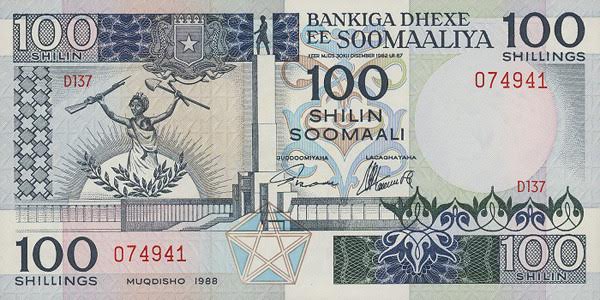 Somalia intends to resume printing banknotes this year for the first time since the government collapsed in 1991.

The governor of Somalia’s central bank, Bashir Issa Ali, told VOA in an exclusive interview Saturday that all technical preparations are complete, and his government is confident it can assemble a financial aid package within three months to fund the printing programme. Further work would take another four months.

Pre-1991 banknotes have disappeared from Somali markets, replaced by either Western currencies, including dollars, or privately printed notes, most of which are worthless fakes.

Ali said international institutions, such as the World Bank and the International Monetary Fund, as well as the US Treasury, have been helping Somalia reform its financial sector and train central bank staff.

“We have prepared all the issues and all the basic groundwork, and put in place the technical requirements,” he told VOA.

The Somali government needs US$60m to be able to begin printing banknotes. Ali said he expects to obtain pledges for that sum at an international donors’ conference for Somalia in London in May.

“We expect the international community to assist us with that issue,” the bank governor said.

Hardship and the scarcity of trustworthy currency has created opportunities for some innovative strategies in the private sector, Ali said, and Somalia has made some progress in establishing private banks and mobile money systems.

Somali shillings account for a small portion of the payments system, he said.

“Most of it is done through dollars and electronic money, which is a great thing for… saving costs and effort and very convenient, also.”

Remittance companies that relay payments from Somalis working abroad operate in many parts of the country, Ali noted, but a large part of the nation does not have access to electronic funds or dollars, so there is an urgent need for a reliable national currency.

Once Somalia-printed banknotes begin to circulate, the central bank governor said, his staff will be able to regulate and control operations by private banks and remittance services.

The bank now has trained staff members to work on the financial and exchange systems, and training efforts are continuing. On February 12, he said, “more than 10 staffers are departing for training about counterfeiting and financial controls. They include staff from the bank, police and the national security agency.”

Since Somalia does not yet have its own currency, it also lacks a monetary policy, Ali said, but once the banknotes begin circulating, he looks forward to “the beginning of a new era” in the east African nation.

“Monetary policy always must come together in close collaboration with the fiscal policy of the government – taxation and revenue, the public budget and these kind of things,” Ali told VOA. “We don’t apply any monetary policy at the moment.”

“When you don’t have enough crops, it will contribute to food shortages,” he said. “When you have drought problems, you will not be able to export livestock.

“That will affect our foreign market and our exports,” he added, so Somalia’s foreign-exchange earnings will decline.

“When you get less foreign exchange, you will not be able to import what is required,” the bank governor said, “and when you import less, there will be less tax revenue for the government”.

In the short term, the peaceful election of a new Somali president appears to have helped the nation’s economy. The Somali shilling rose in value compared with the US dollar over a two-day period; $1 brought 22,000 shillings before the election in Mogadishu, and by Saturday it was trading at 16,000 shillings.

“It’s a matter of expectations. There is a new government, new environment and new atmosphere,” Ali said, and that will have an effect on people’s opinions about security, the economy and the stability of the government. – VOA