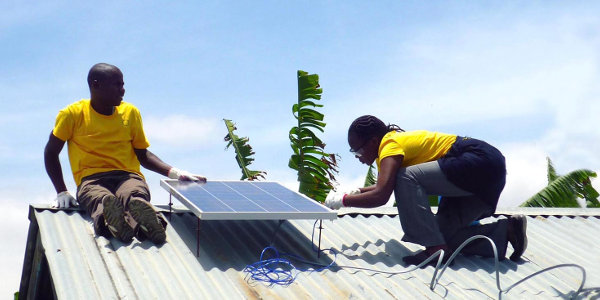 Berlin-based solar company Mobisol has sold 40,000 home solar systems to mostly low-income earners in off-grid locations in Tanzania and Rwanda – and is now looking to expand to Kenya.

The German company uses a ‘rent-to-own’ model, giving customers home solar systems of either 80W, 120W or 200W as they make small daily payments via mobile money for up to three years. For example, to acquire the 80W system, which comes with a flat-screen TV, users in Rwanda and Tanzania pay a US$25 deposit, and continue to make daily payments of $0.50.

In addition to the solar systems, buyers can also acquire other solar-powered appliances such as haircutters and straighteners, music systems and DC-powered cooking stoves.

“We sell high-quality electrification solutions to people who can’t just go to a shop and buy an $800 solar system,” says Klaus Maier, corporate development manager at Mobisol, who is in charge of expansion within Africa. “We want to electrify households. We don’t think two lights and phone charging is electrification. It is a nice way of improving lives, but we believe in powering entire households and businesses with all kinds of appliances people need. We want to bring the ‘modern lifestyle’ to rural areas.”

Mobisol sells between 120 and 150 solar systems per day, through a team of over 300 direct sales agents in Rwanda and Tanzania. These agents are equipped with tablets that have an app used to collect and analyse data. A potential customer’s credit-worthiness is determined based on a set of questions, as well as information from other sources, such as credit bureaus.

“We don’t ask how much they make per month because some people don’t know how much they make. But they do know how many cows they have, how many litres of milk one cow gives, and how much milk they sell every day. We can just check the market price for milk and get some numbers on the person’s likely income.

“Instead of asking how much they spend, for instance, we ask how many children they have, are they all in school, and what kind of school do they go to? We can then check the tuition fees at the school, and get reliable data on the ratio between income and expenses,” Maier explains.

The process takes about 30 minutes, after which the customer receives an SMS instructing them to go to a Mobisol satellite store to collect their solar system.

If customers fall behind on making payments, they receive reminders via SMS, and if they still don’t pay, the system ceases to function. Mobisol has recorded an average default rate of less than 5%, with higher defaults in Rwanda than in Tanzania.

“But defaults don’t necessarily have to do with the people, it could be the sales approach. I believe people stop paying because they are not satisfied with the service, or we did a bad credit check. Maybe we allowed somebody to get a 120W system when they could only afford an 80W system. Our default rate is good, but we can improve it,” says Maier

Maier says the TVs are the biggest attraction for most of Mobisol’s clients.

“People love the TV. They also love the lights, but they have other options for lighting from candles to kerosene. Even though they may not like those lighting options, they have worked for generations to generations. But you can’t power the TV with kerosene,” adds Maier. “The TV is a selling point in itself. It is aspirational. They may live in rural areas but they understand what is going on in the world. They too are aiming big. They want a modern lifestyle.”