Germany-based Siemens has received its first wind turbine orders in Africa, marking the multinational’s entry into the continent’s wind market. 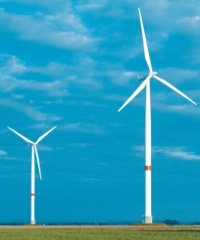 The company today revealed in a statement that it will deliver 44 wind turbines, with a total capacity of 100 MW, to the Haouma and Foum El Oued wind power plants in Morocco. Both plants are expected to come on stream by 2013.

Morocco has set itself a target of increasing the contribution of renewable energy to 20% of total electricity generation by 2020.

In December, How we made it in Africa reported that Siemens has announced plans to dramatically ramp up its African operations. It will invest $260 million to boost local manufacturing and to strengthen its sales teams on the continent. “As an integrated technology company Siemens is able to provide answers that Africa needs to tackle many of its infrastructure challenges . . . From wind turbine technologies that produce clean energy to technologies that can get electricity to the 560 million Africans who don’t have access,” said Siegmar Pröbstl, CEO of Siemens Africa.

The Haouma Wind Farm project will be built in northern Morocco, approximately 30 km east of Tangier, and 6 km south of the Mediterranean coast. At 50 MW, Haouma will feature 22 wind turbines. Foum El Oued will be built in one of the windiest areas of Morocco in the municipality of Laâyoune, 9 km south-east of the port of Laâyoune in southern Morocco.