In a recent research report, titled African Agriculture: This other Eden, Renaissance Capital identified a number of factors that are likely to influence African agriculture in the years ahead. A summary below: 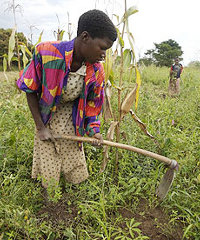 Rising urbanisation could mean that cheap farm labour will disappear from the countryside.

China’s meat consumption has increased significantly over the past decades. In 2001, the average Chinese consumed around 43 kg of meat every year. Over the following ten years, annual per capita consumption rose to approximately 54 kg, a 22% increase. More meat consumption has led to a rising demand for soya beans – a popular source of feed for livestock.

In addition to soya beans, China’s ability to be self-sufficient in the production of other crops is also likely to be reversed in a dramatic fashion over the next few years. Renaissance says that the same situation as what happened with soya beans could play itself out in other grains, such as maize, wheat and rice. The past two years has seen a minimal increase in the harvested area for wheat and rice, while yields for all three grains have also only seen a marginal improvement. Rising urbanisation is putting increasing pressure on farmland.

It is not only China that will import more grains. Similar dietary changes are underway in a number of other emerging economies. As demand rises, internal constraints in a number of geographies are becoming apparent. Renaissance says this is a good opportunity for Africa, which has significant farming potential, to increase its exports of agricultural commodities such as maize, palm oil and other crops.

The UN Food and Agriculture Organisation (FAO) believes that 70 million hectares of additional farmland is required to feed the world’s 9 billion people by 2050. The Americas could most likely fulfil this need alone with Canada, the US, Brazil and Argentina providing the bulk of additional supply.

However, the issue of food security is not only about basic needs and how to fulfil those needs – it is also about the risks attached to achieving it. In common with the oil & gas industry, there comes a point where an over-reliance on too few suppliers for a country’s energy needs makes it hunt out alternative sources of energy. A similar need to diversify supply will likely arise in agriculture, and this represents a major opportunity for Africa to provide the world with food security.

Although resource nationalism is often associated with the extractive industries, Renaissance expects the issue to also come to the fore in African agriculture. Resource nationalism is not always entirely driven by anti-foreign sentiment. High prices help, too. The electoral success of Evo Morales in Bolivia, Hugo Chávez in Venezuela and the recently elected Sata government in Zambia might never have materialised had it not been for the prevailing high prices of oil, gas and copper over the past decade.

High prices for agricultural goods, the need to secure alternative food supplies and the sensitivities of access to and ownership of land, all suggest resource nationalism in agriculture is likely to become a more prominent theme in the years ahead.

4. Will urbanisation lead to farm mechanisation?

It estimated that 60% (currently 40%) of the continent’s population will live in cities by 2050. As more and more workers flood into urban environments and readily available pool of cheap workers disappear from the countryside, farmers are forced into a straightforward labour-capital shift. In short, farms must mechanise if they are to maintain their competitive position.

Smallholder farmers, too, must make a decision: if they dedicate their supply of labour to generating urban-derived income, what do they do with their land? Another way to look at this conundrum takes the form of a question: is the rise of the superfarm inevitable?

The rise of the superfarm is a relatively modern phenomenon. There are possibly fewer than 100 industrial groups that own, lease or operate farms of over 100,000 ha.

Do economies of scale exist in agriculture? The purchasing power on inputs or selling power on output that comes with a 100,000 ha farm is likely to be no greater than a 1,000 ha farm. This is accentuated by two factors: first, managing 100,000 ha under a single corporate umbrella is more likely to result in managerial dis-economies of scale; and second: 100 farmers managing 1,000 ha plots each can easily form a co-operative, which will provide them with all the purchasing benefits of the superfarm and none of the dis-economies of scale. However, many superfarms exist because they act as channels for investment capital. In short, while managerial or operating economies of scale might not exist, financial economies do.

Ultimately, the debate over superfarms comes down to money. How does one create a conduit for capital for investment in agriculture? Can smallholders provide that conduit? If so, it would be reasonable to assume they had a future in this most strategic of industries. However, the volatility of food prices, the rapid urbanisation that characterises large parts of our planet, the relative undercapitalisation of the sector and the sheer variability of the agricultural labour force in its current form, all suggest that in creating those conduits for capital, superfarms are likely to play a hugely important role in attracting investment to the sector.

One of the overriding issues for humanity is that every civilisation with an urban heartland has been built upon the availability of food and water. In fact, it is the existence of those food and water resources, which has allowed urban societies to flourish. However, over time, every single one of those civilisations, societies and states has collapsed because its depleted and exhausted hinterlands could not supply its cities with their food and water needs.

The collapse of food-supply systems that support urban societies has been a permanent issue since urban centres were founded. Renaissance anticipates a great deal of new thinking on sustainability in agriculture, and expects Africa to lead much of that new thinking.

7. The future of aid

African food aid will likely be transformed, too. Renaissance says that many aid agencies operating on the continent are setting agendas that hamper commercial development. The idea that some aid agencies are seeking to transform themselves into commercial enterprises highlights the new thinking that abounds in Africa. Traditional methods of delivering aid are likely to become redundant in the decades ahead.