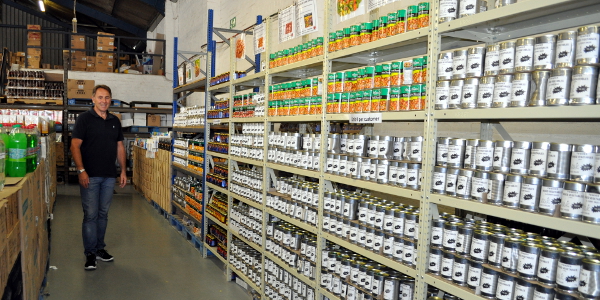 Would you pay 50% less for a can of beans that had past its ‘best-before date’? About 25% of South Africans would, according to entrepreneur Dave Bester.

He is the co-owner of Foodies, a grocer of four outlets in Cape Town that sells the stable shelf food (such as canned goods, coffee and pasta) that large retailers send back to manufacturers.

Walking around his flagship store in Diep River, you spot canned food with small dents in the tin, imported chocolates and pasta that failed to find a market locally, and, of course, products that have past the best-before date.

“Consumers see a best-before date as an expiry date, but it is not,” Bester told How we made it in Africa.

He explained that best-before dates are guarantees made by manufacturers on the quality of product within a particular time frame. Unlike fresh products – such as milk – which have expiry or use-by dates, most non-perishable foods are perfectly safe to eat long after the dates stamped on their packaging. And while it is illegal to sell or even donate food that is past its use-by date, there is no law against selling those past their best-before dates.

Bester believes that manufacturers and retailers benefit from the common misconception that a best-before date is the same as an expiry date, because it drives consumption. But the amount of food retailers return to manufacturers adds considerably to food wastage.

Research conducted by South Africa’s Council for Scientific and Industrial Research (CSIR) in 2012 reveals that the country generates over nine million tonnes of food waste annually (throughout the supply chain), at a cost of R61.5bn (US$4.5). Every year, manufacturers spend billions dumping their food in landfills, which studies show has damaging effects on the environment.

Getting manufacturers on board

Foodies began when Bester’s business partner noticed an opportunity to buy damaged food products from insurers that had acquired the product through claims. Most of these products were still safe to consume, but did not meet the standards of formal retailers.

For example, if a truck overturned and damaged the packaging of a product, or there was a fire that made chocolate wrappers smell slightly of smoke, these products would end up with an insurance company. They would then try to sell the goods to recover some of the insurance they paid out to their client.

Foodies began reselling these products at a discount and Bester’s business partner soon saw the opportunity to buy unsold products that were returned to retailers.

But many manufactures were concerned about compromising the reputation of their brands by allowing products to be sold at discounted prices or with damaged packaging.

So when he joined the company two years ago to help formalise the business, Bester, who has a background in marketing and advertising, started to tackle this problem.

Firstly, he told manufacturers, all Foodies stores would be located far away from formal retail centres, so that these discounted products did not compete with those sold full-price in established supermarkets.

Secondly, Foodies agreed to promote products, not brands – advertising, for example, tomato sauce in general rather than a particular make, unless granted permission from the manufacturer.

Thirdly, Foodies places a limit on how much of each product an individual can buy, to prevent wholesalers from reselling the food. “We guarantee manufacturers that whatever they sell to us will only be sold to the public in a Foodies store,” says Bester.

Foodies also repackages a lot of products, or strips the brand label from the original packaging. It then prints its own label containing all the necessary nutritional information.

“All of these parameters have been put in place to make manufacturers feel more comfortable. And it has worked,” adds Bester.

Foodies products are on average half the price of those sold at traditional retailers, and Bester estimates that the company has about 12,000 customers a month, many of whom are pensioners.

He notes it is a misconception that his customers are only within the low-income segment. The poorest consumers, he explained, are more likely to avoid products with damaged packaging, as they cannot afford to risk a product that might be inferior.

“From my days in advertising I know that poorer consumers buy brands because it is trusted quality. If I only have R10 to spend and I’m buying a bag of mealie meal, it better work because if it doesn’t I have wasted [my only] R10,” he explains.

Bester is also trying to educate consumers about best-before dates and how they can lead to wasting good food, but says that it is difficult. For many, the idea of food beyond a best-before date is off-putting.

However, a quarter of consumers think differently.

“There is a rule of thumb that about 25% of people are very price sensitive. Now that doesn’t mean that they are necessarily from the lower-income groups or the higher-income groups – it is about a mindset. They are people that look for a deal, and they trade quality versus price for their perceived value.”