Walking through Isivunguvungu Wind Energy Converter’s (I-WEC) workshop in the Cape Town harbour, one could feel the anticipation in the air. Soon this will be South Africa’s first large-scale wind turbine manufacturing plant. The reason for my visit was to witness the arrival of a 50 metre mould from China that will be used to manufacture the wind turbine blades. Due to technical issues, the unloading of the mould was postponed to the following day. I therefore decided to learn more about the project from Thomas Schaal, co-founder of I-WEC. 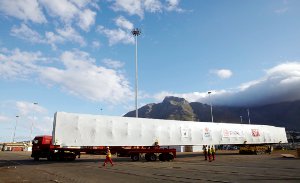 Through its R100 million (US$12.8 million) investment, I-WEC plans to supply turbines to independent wind energy producers in South Africa. While some of the components will be imported, a large percentage will be produced in South Africa. Everything will be assembled locally. “We estimate 65% local content right from the beginning of our operations,” said Schaal.

South Africa’s wind energy industry is expected to take off in the coming years as the government recently finalised regulation around the renewable energy sector. South Africa’s Integrated Resource Plan envisages renewables contributing 42%, or 17 800 megawatts (MW), of the country’s new generation capacity by 2030. In the first round of the procurement process, 1,850 MW are reserved for wind energy. Potential power producers will compete in a tender process.

Schaal revealed that I-WEC is in the process of negotiating with steel giant ArcelorMittal for the supply of six wind turbines to its Saldanha steel facility on South Africa’s west coast.

According to Schaal, I-WEC will be able to compete with Chinese manufacturers on price in the South African market. He noted that the transport costs of importing blades and other equipment from countries such as China, can be as high as 5% of the total amount. I-WEC’s products also carry the necessary certifications required in the South African market, which many of the Chinese products don’t have. He added that it is often difficult to secure financing and insurance for non-certified technology.

I-WEC’s long-term ambitions stretch beyond South Africa. “In the initial phase we will concentrate on South Africa, however, we have a licence which allows us to export. And we would certainly like to export our turbine to neighbouring countries . . . surely also the entire continent. We know that in Egypt there is also a wind turbine manufacturer. Most likely they will actually serve the northern part of Africa. But yes, we intend to export to Africa, perhaps also to South America,” explained Schaal.

I-WEC has set itself a goal of manufacturing 200 units per annum in five years’ time. “The market is good enough for that. And also we have the opportunity to export,” he said.