London-based brewer, SABMiller, has recorded an increase in its African sales volumes during a year in which economic growth slowed as a result of the global economic recession, and which also resulted in weaker currencies, increased cost of debt and higher inflation.

The company today reported its preliminary (unaudited) results for the twelve months to 31 March 2010.

In Africa, our beer markets were broadly resilient, with the majority continuing to grow through the year albeit at a slower rate than in recent years. 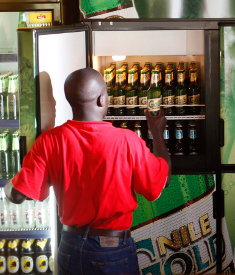 The launch of SABMiller's Nile Gold, a premium malt lager, in Uganda was well received.

Botswana‘s lager volumes were severely impacted by the social levy on alcohol introduced in November 2008, while volumes in Tanzania fell in line with a market affected by unseasonable weather earlier in the year.

Soft drinks volumes grew 4% organically for the year. We continued to grow our beverage platforms with the acquisition of water businesses in Ethiopia and Uganda and of a maheu business, a non-alcoholic traditional beverage, in Zambia.

During the year, we invested in new breweries in Angola, Mozambique, Southern Sudan and Tanzania and upgraded capacity in Uganda and Zambia.

In South Africa, lager volumes were 1% below the prior year in a market that grew marginally. The market was buoyed by the inclusion of two Easter buy-in periods within the financial year although consumer spending remained generally subdued. Our lager sales benefited from refreshed positioning and communication for our core brands, together with increased investment in sales capability and customer service.

Soft drinks volumes declined 1% during the year due to the weak economic environment and unfavourable weather conditions during the peak summer trading period.

In Tanzania lager volumes declined 4%, in line with the industry, as a result of softer consumer spending and adverse weather conditions earlier in the year.

Marketing spend on all brands was increased with a focus on brand innovation.

Ndovu Special Malt and Castle Lite were both launched in the premium segment in a new 375ml green bottle and volume performance was above initial expectations. Safari Lager, Redd’s and Castle Milk Stout all benefited from packaging renovations. Our new brewery in Mbeya was successfully commissioned during the second half of the year allowing us to reduce distribution costs in the southwest region.

Our arrangement with East African Breweries Limited (EABL) to brew and distribute their products in Tanzania was terminated in the final quarter of the year.

Mozambique returned to strong growth with lager volumes up 11%. This reflects improved economic conditions and good growth in the north, aided by the commissioning of our new brewery in Nampula.

Both Laurentina Premium and Laurentina Preta, a dark lager, grew strongly. The draught category performed well in the on-premise channel.

Uganda delivered strong lager growth of 24% assisted by newly upgraded capacity and improved market execution. The launch of the new long neck bottle invigorated the market and differentiated the Nile Special and Club brands. In addition, the launch of Nile Gold, a premium malt lager, was well received.

In the final quarter, we completed the acquisition of the Rwenzori water business, the market leader in bottled water in Uganda.

Zambia lager volumes benefited from the reduction in excise at the beginning of the financial year, driving growth of 17%. A further excise reduction was announced in March 2010.

In Angola, in a very challenging year, soft drinks volumes ended 5% below the prior year, while lager volumes grew 5%. After years of strong economic growth, Angola experienced negative GDP growth following a significant drop in oil revenue. During the year, the kwanza was de-linked from the US dollar resulting in a 15% depreciation and the imposition of severe currency restrictions. These
factors negatively impacted consumer spending.

Capacity constraints, exacerbated by difficult logistics, hampered production whilst the cost of imported raw materials was adversely affected by the currency depreciation.

In Botswana, the sale of alcoholic products continued to be adversely affected by difficult economic conditions, the social levy introduced in November 2008 and restricted trading and drinking hours. Our lager volumes ended the year 35% below the prior year.