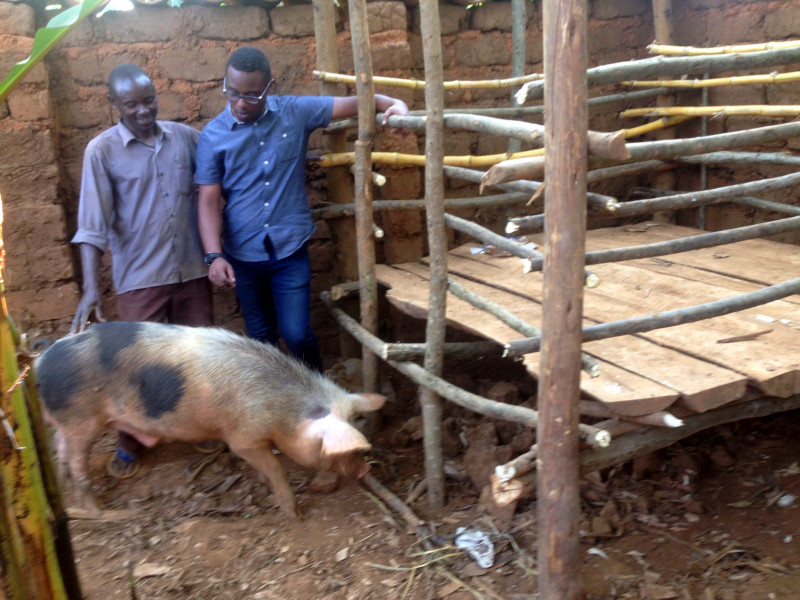 Back in 2010, a young Herve Tuyishime, a recent graduate from the Kigali Institute of Management in Rwanda, landed a job as an accountant for an insurance company. He had two passions and accounting wasn’t one of them.

The one was to write scripts and produce films, the other was agriculture. “I was not happy with the job that I was in. It was repetitive,” says Tuyishime. He enrolled at the Regent University Centre for Entrepreneurship’s Business Development Centre in the capital Kigali, a programme offered in partnership with the Rwanda Development Board, hoping this would broaden his horizons and provide guidance for his future.

Armed with the knowledge from the entrepreneurship centre, Tuyishime realised filmmaking wasn’t feasible in Rwanda and turned to his other passion: farming.

He pitched a business idea at a local entrepreneurship competition hosted by the government. One of the criteria was that the enterprises should have a focus on value-addition and Tuyishime’s pig farming and meat processing business idea won first prize: a bank loan of 20 million Rwandan francs. He used the money to start Paniel Meat Processing (PMP) in 2012.

Road bumps along the way

Tuyishime wanted to farm but he lived in the city. So PMP’s farming business began on a piece of land within the Kigali city limits. The house on the property was used for the processing of the meat. The company’s first machines – a meat grinder and sausage stuffer – were purchased from an entrepreneur who tried his hand at the business but failed. PMP also constructed its own sausage smoker and set up the rudimentary processing centre with some knives and tables bought from the local market.

The customers were small informal shops found all over the city. The team visited these owners, trying to get the sausages into the stores and then into the hands of customers.

Initial growth seemed to come quickly. Within six months the company was supplying more than 180 of these shops. However, it faced competition from other suppliers offering a similar product. To diversify, PMP shifted its focus to the bars in the city. These establishments would procure meat or sausages to serve to their customers. Tuyishime believed the company could grow its market if it cut out the middleman and sold directly to the bars. Using feedback received from the patrons, it also expanded its product range.

By 2014, the business reached a crossroad. It still needed to pay off its seed capital loan and with competition from more than 10 other established meat processors in Kigali, the existing demand wasn’t enough to use all the meat from PMP’s farm operations. 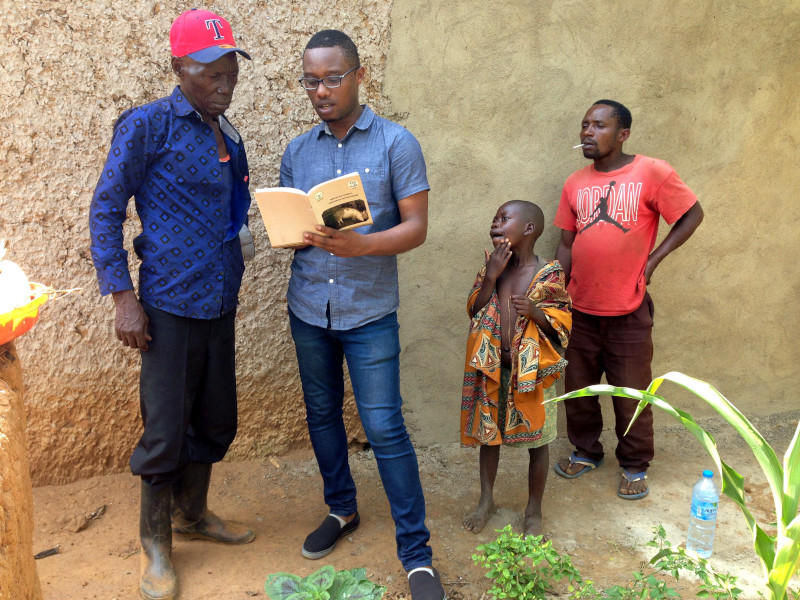 The farming aspect was also suffering because Tuyishime’s time was spent largely on trying to grow the processing business. He made a tough decision to focus the operations of PMP on the value-addition only and gave away his remaining livestock, 13 pigs. “The farming was too consuming. I had to let it go to focus on the meat processing but it was not an easy decision,” he recalls.

Tuyishime realised the company would need to shift its focus from Kigali, to find a bigger market. In that year, operations moved to the Rubavu region, just a hop and a skip from the Democratic Republic of Congo border city Goma with its very large consumer market.

Diversification into a group of companies with a focus on exports

Over a short period, with the export market of Goma at its doorstep, PMP increased production from 100kg of sausages per week to more than 700kg. “We were beginning to see the value of a big market and production at scale,” reveals Tuyishime.

He was still smarting from having to give away 13 of his pigs to a friend before the move from Kigali but started thinking about the supply chain for his operations in a different way.

He established Livestock Bank in the same year. It provides the best breed of animals to farmers willing to rear them, along with inputs such as quality animal feed, veterinary services and training in farming techniques. When the animals reproduce and the offspring are taken to market, Livestock Bank deducts the expenses connected to that particular animal and shares the profits with the farmer. “The farmer gets 60% and Livestock Bank takes 35%. The remaining 5% is saved so we can invest in another farmer. We currently have 1,092 farmers on the programme,” explains Tuyishime.

The production generated from its affiliated farmers helped with the supply of meat for PMP’s operations once it had access to the cross-border market in the DRC and expansion to other markets soon followed. “Our Goma customers connected us to others in Kinshasa. The Kinshasa customers connected us to clients in Brazzaville. Then came Pointe-Noire and even Libreville,” he adds.

As PMP gained a reputation as a trusted B2B supplier, clients requested more than just sausages. They were looking for fresh meat: beef, lamb, goat and chicken.

PMP concentrated on its export market in the DRC, the Republic of the Congo and Gabon, expanding its product offering to include fresh and frozen meat but the company soon felt the pain of many agri-processors in Rwanda: a shortage in cold-chain options to ensure products reach their destination in top condition. “It is a massive problem in the country,” says Tuyishime. “When we needed a refrigerated truck in those days, we sometimes spent three to four days trying to secure one.” 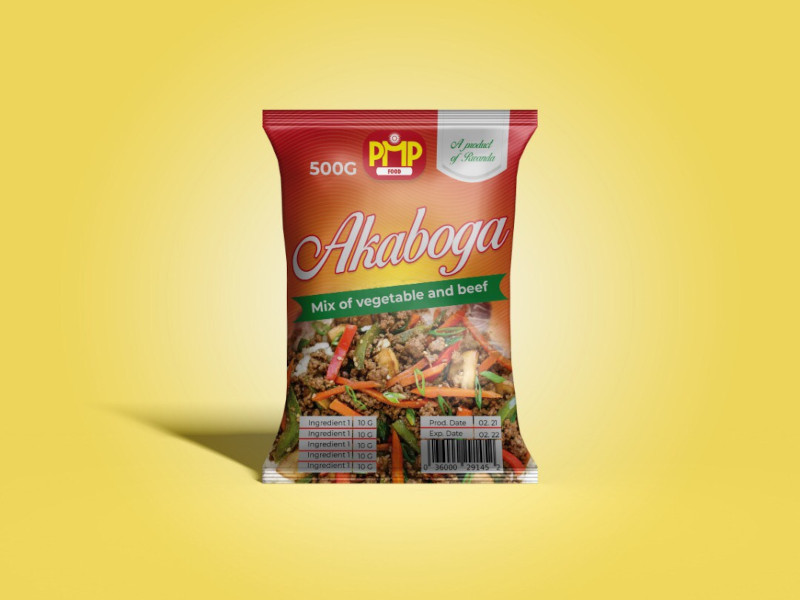 Akaboga, a mix of processed meat and vegetables, recently developed by PMP.

In 2019, PMP Transport and Logistics was established. It has four large refrigerated trucks for long-haul trips and two smaller trucks that cover the shorter deliveries; from Kigali to Goma, for example. The company also has its own cold storage room and is looking to add more of these facilities.

B2B for now, but B2C on the horizon

Today, PMP has the production capacity to process five tonnes of meat per week. It is planning a larger processing facility that will adhere to international standards required from some of the possible export markets it has its sights on. “The facility will meet these standards and allow us to access a market within Rwanda we currently cannot tap into. This group of consumers demands higher standards and is left to import meat from other countries,” says Tuyishime.

The success over the last five years can be ascribed to its export B2B focus, as local supply far outstrips demand. “In the local streets and markets, the customers don’t care about much more than the price. You have many suppliers who can provide cheaper meat, from animals they have reared and slaughtered. So far B2B has worked for us. We play in the wholesale market where an importer requires two, five or 10 tonnes of meat.”

Purchasing power in Rwanda is still a challenge for meat processing businesses. Some people just don’t have the budget to include meat in their diets and certain types of meat products are deemed unacceptable by many consumers in the country. “We have a lot of customers who believe – for religious or other reasons – that they cannot eat pork and only beef or goat qualify.”

“We are looking at employing distributors in the neighbourhoods. We are talking to partners here in Rwanda, the eastern DRC, Kenya, Uganda and even Tanzania. We will customise the taste of the product to the region,” he says.