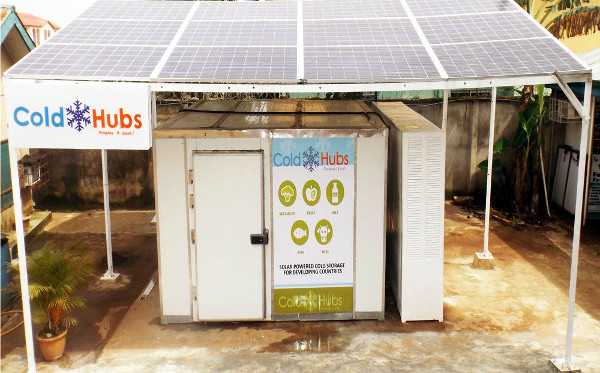 For over a decade now, Nnaemeka Ikegwuonu has been producing radio shows for smallholder farmers in the rural southern region of Nigeria. These agricultural programmes are broadcasted on the Smallholders Farmers Rural Radio – a community station he established in 2003, when he was just 21 years old.

As a vegetable farmer himself, Ikegwuonu has first-hand experience of the huge post-harvest losses incurred because of a lack of cold storage. In Nigeria, it is estimated about 60% of smallholder farmers’ fruits and vegetables spoil due to inadequate storage and agro-processing facilities.

Ikegwuonu is addressing this challenge with ColdHubs – a solar-powered walk-in cold-room solution aimed at farmers, retailers, and wholesalers. The cold rooms are installed at major food production and consumption centres, such as markets and farms.

The idea for the venture came from a radio interview he did with a cabbage seller.

“I was going to interview a young man who came with a J5 truck full of cabbage. However, a few hours to the close of market, I couldn’t find him except for his truck of cabbage,” Ikegwuonu recalls.

When Ikegwuonu went looking for him the next day, he saw that the seller had just three baskets of cabbage left.

“I asked him why he left a J5 truck full of cabbage unattended to and he told me the cost of taking it home doesn’t make any sense. It is better it waste there or let the driver of the J5 find someone who will buy it to cover the cost. And I was thinking, in the south-east of Nigeria, that is a lot of money!”

Ikegwuonu questioned the young man on what could be done to make his business better. The cabbage seller told him, “If there is a way to preserve foodstuff in the market, he would have kept it there, sell a little bit of cabbage as much as he can sell in a day and pay for storage until he finishes his sales.”

After Ikegwuonu’s encounter with the cabbage seller, he began looking at different business models to create a lasting solution to post-harvest losses.

In 2014, Ikegwuonu and his team at Smallholders Foundation, a social enterprise he started 15 years ago, began a research project that led to the building of the first solar-powered cold room. He travelled to Dresden, Germany to meet with scientists, and together they came up with a design in three weeks.

With ColdHubs, Ikegwuonu and his team design, assemble, install and operate solar-powered walk-in cold rooms that enable small-scale farmers, retailers, and wholesalers to extend the shelf-life of perishable fruits and vegetables from two to 21 days.

“It is a very robust system that is culturally and environmentally friendly,” explains Ikegwuonu. “The cold rooms run on solar panels during the day. The energy stored in the battery during the day is used for night-time cooling.” 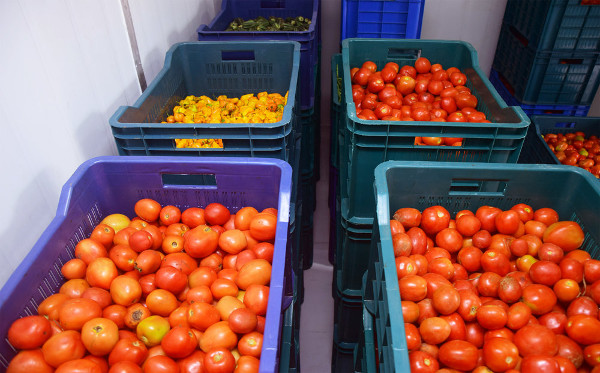 In the beginning ColdHubs had to educate small-scale farmers on the benefits of storing their fruits and vegetables in a cold room.

ColdHubs users pay 100 Nigerian naira (30 US cents) per crate or carton to keep their produce in the cold room for a day.

Each hub has two officers – one serves as the cold-room operator, while the other does marketing to educate potential customers on the advantage of using ColdHubs.

The company currently has five cold rooms in operation, with three situated at markets in Imo state and another two hubs in Kano state in northern Nigeria. In addition, ColdHubs built a cold room for a company in Lagos, and is currently working on another 10 units for markets in Katsina and Imo states.

At first, when Ikegwuonu introduced the concept to farmers, they were sceptical about how such technology could help them

“What we battled here is a high level of illiteracy. This is because unlike in developed countries, where cold chain works very well, we are actually developing a cold-chain system in Nigeria – something that has never been done before.”

“Farmers, especially retailers, told us that they don’t keep tomatoes in the fridge because it will spoil. We didn’t build a fridge; we built a cold room with a temperature that ranges between 8 °C and 16 °C. And data on food storage in the world tells you that produce like tomatoes store very well, even up to three months when you have the temperature ranging between 8 °C and 16 °C.”

To resolve this misunderstanding, ColdHubs invited potential customers to keep their products in the hubs for free.

“We were able to convince them to store their tomatoes inside the hub for two weeks. After that, they saw that putting vegetables and fruits in the cold rooms doesn’t spoil it, it actually extends its shelf life. There was a lot of celebration among them.” 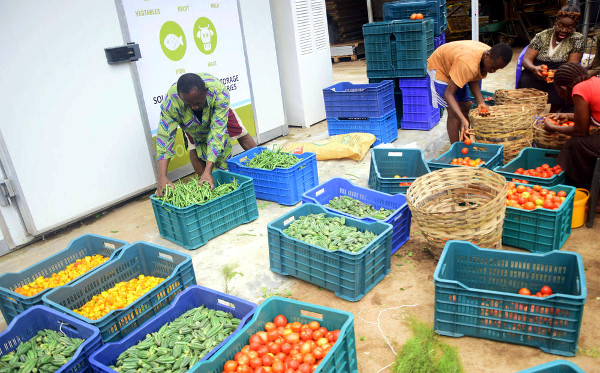 Customers pay about 30 US cents per crate for a day of cold-room storage.

Ikegwuonu’s initial research was self-funded. But after this, he approached Nigeria’s agriculture ministry for support. This was when Akinwumi Adesina (currently president of the African Development Bank) was the minister.

“In 2013, I spent three months in Seattle with Fledge, an accelerator programme. During this period, I was writing a bunch of emails to investors I came across – either in my interaction with people at Fledge or during my Google search. I later came across Factor(E) and I saw that they have invested in a couple of energy start-ups in Africa. I wrote them an email and after a couple of meetings, emails back and forth and background checks, they invested US$280,000 in ColdHubs.”

The capital was used to buy materials to install and commission the current five cold rooms and well as to cover operational costs. ColdHubs has also received some money from GIZ, Germany’s international development agency, to support it during the design stage.

According to Ikegwuonu, ColdHubs is attracting increasing attention.

“When we set up in 2014, we were not sure it was going to work out. We have a cold room that takes approximately $27,000 to put together and if people don’t patronise that service, it means that it’s a failure. Today, we have more than 200 customers across the board. It means, there is a business there that has not been explored.”

“We actually started this business in September 2016 and for us, the payback system per hub should take between 18 to 24 months. Our estimate is that it will take us up to two years to break even.”

In the next five years, Ikegwuonu plans to launch 1,000 solar-powered cold rooms in Nigeria and expand the business to other parts of Africa. He hopes to use Kenya as a launch pad into East Africa, and either Zambia or Zimbabwe to enter the Southern Africa market.

He says while there are bound to be obstacles, they can be overcome with determination and hard work.

“If your business plan or application is refused, don’t let it affect you. I mean I have been refused about a 150 times but it doesn’t affect us… Grow a thick skin and see the refusal as an opportunity for better acceptance.”