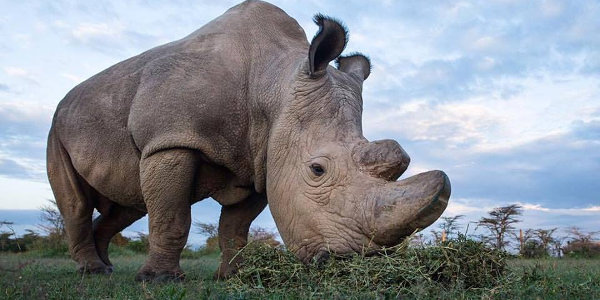 ‘The world’s most eligible bachelor’ last month joined dating app Tinder. Sudan, the 43-year-old northern white rhino, lives at the Ol Pejeta Conservancy in Kenya. He is under 24-hour armed security watch due to threats from poachers, and lives with female northern white rhinos Najin and Fatu, also the only ones of their kind in the world. However, they have been unable to breed naturally due to a variety of issues, including old age.

Ol Pejeta Conservancy has partnered with Tinder to increase awareness about the northern white rhino and also raise $9m meant for research on assisted reproductive techniques (ART) that would help save the species from extinction.

Sudan has an interesting profile on the app: “I’m one of a kind. No seriously, I’m the last male white rhino on planet earth. I don’t mean to be too forward, but the fate of my species literally depends on me. I perform well under pressure. I like to eat grass and chill in the mud. No problems. 6ft tall and 5,000lbs if it matters.”

When Tinder users ‘swipe right’ on Sudan’s profile, they are directed to a page from which they can donate towards this cause.

“We partnered with Ol Pejeta Conservancy to give the most eligible bachelor in the world a chance to meet his match. We are optimistic given Sudan’s profile will be seen on Tinder in 190 countries and over 40 languages,” said Matt David, head of communications and marketing at Tinder.

Ol Pejeta Conservancy reported significant traffic to its website because of the campaign: “Due to the overwhelming success of day one of our ‘most eligible bachelor campaign’, our website is experiencing some technical issues. Our team is currently working to resume normal service. Not to worry though, there are still many ways to contribute to the rescue of the northern white rhinos,” read a statement on its Facebook page.

Things also got interesting a few days later when Sudan got a match in Faru Fausta, a female rhino from Tanzania. 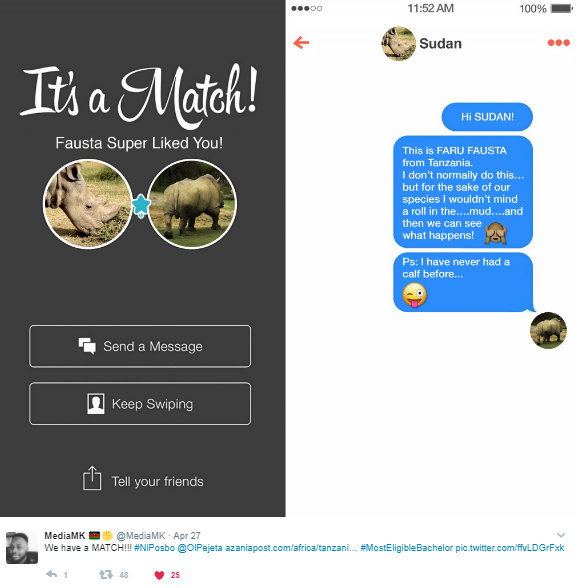 “This represents the last option to save the species after all previous breeding attempts proved futile,” said Richard Vigne, CEO of Ol Pejeta Conservancy.