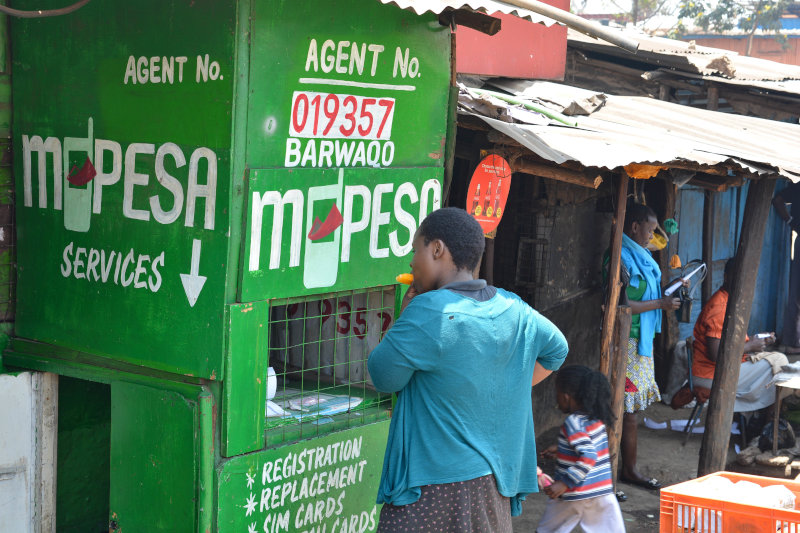 An M-PESA agent kiosk in Kenya.

In this report we continue our review of the five structural trends that we initially outlined, almost a decade ago, to be behind Africa’s underlying and lasting economic and institutional appeal. Thus far we have reviewed Africa’s demographic and income developments (see here); the opportunities and risks that emerge as a result of the continent’s rapid urban growth rates (see here); and the powerful technological change that is driving progress in key economies on the continent (see here).

We now turn to the financial sector, and specifically financial inclusion, in order to assess progress in this area over the past decade. This report covers three broad areas: (1) the economic and developmental importance of financial inclusion; (2) shifts in and drivers behind financial inclusivity in Africa since 2010; and (3) prominent challenges facing the continent in further deepening financial access.

In Africa, savings and digital financial services have proven to be most effective in this regard. One study found that use of the mobile money system M-PESA in Kenya increased per-capita consumption levels and lifted almost 200,000 households out of poverty. Separately, Malawian farmers who deposited their earnings into a savings account spent 13% more on farming equipment and increased their crop values by 15%.

(2) There have been dramatic and positive shifts in financial inclusion across Africa over the past decade. Between 2011 and 2017, the share of adults in sub-Saharan Africa with a bank account almost doubled, from 23% in 2011 to 43% in 2017 (a nominal increase of 160 million people). These gains were broadly shared, too: the share of accounts held by the poorest 40% of the adult population grew from 13% to 32%, while the wealthiest 60% of the adult population saw growth from 29% to 50%. These gains have supported impressive growth in the continent’s retail banking sector, which is, according to McKinsey, the second-fastest growing and second most profitable in the world.

The principal enablers of these developments are the trends that we have previously detailed in this series. Simply put, the deepening of financial inclusion on the continent is being driven by its younger, more affluent, more urbanised, and better connected population.

Evidence of the role of technology in elevating financial inclusion in Africa is most compelling. In 2017, 21% of adults in sub-Saharan Africa had a mobile money account, up from 12% in 2014; and one-third of sub-Saharan Africa adults made or received digital payments in the preceding year, up from one-quarter in 2014. Further, Africa accounts for almost half of all mobile money activity in the world, with an estimated transaction value in 2018 alone of $26.8 billion. In 13 African countries, more than one-third of adults are active mobile money users. And between 2011 and 2019, the value of mobile money transactions in Africa grew by 890%.

This growth is fuelling a profound rise in African fintech start-ups. There are believed to be over 400 active fintech companies across Africa, around 80% of which are “home grown”. Surging M-PESA users and revenues over the past decade attest to these opportunities too: last year there were almost 25 million ’30-day active’ M-PESA users in Kenya, up from 14 million five years ago, and just under 10 million in 2010. M-PESA revenues have grown by 160% over this same period. Tech funding has shown important resilience to the Covid-19 crisis, too: though total funding raised dipped, last year saw a 44% year-on-year lift in the number of equity rounds raised by African tech start-ups. The rise of fintech firms is disrupting traditional financial sector players on the continent, forcing them to find new and innovative ways of elevating their reach. Consider, for instance, that in Senegal there are 5.8 commercial bank branches per 100,000 adults, compared to 1,981 mobile money agents per 100,000 adults.

(3) In the main, financial inclusion is impeded in Africa by two primary challenges. First, insufficient income (over half of sub-Saharan Africa adults that do not own an account cite insufficient funds as the reason for this); and, second, inadequate physical and network infrastructure. Of course, a range of other regulatory and political challenges impede the broader growth of the financial sector on the continent, too.

The patchy navigation of these challenges is reflected in how widely divergent rates of financial inclusion are in Africa. At the extreme end, less than 10% of adults in South Sudan and Burundi had an account in 2017, compared to 90% in Mauritius and 82% in Kenya. There are similarly lofty gulfs in financial market sophistication across the continent: in South Africa domestic credit to the private sector as a share of GDP stands at around 150%, compared to 6% in the DRC and 15% in Nigeria. As such, while the generalised path of progress in financial inclusion in Africa is impressive, many markets on the continent continue to be left behind, with serious developmental consequences.

Conclusion: A consistent theme of this report series has been how broad improvements in the underlying trends driving Africa’s progress since 2010 are not equally shared across its 54 economies. This is true of financial inclusion and the broader depth of financial systems on the continent, too. What is also clear from this report is how critical the key drivers of the continent’s structural progress that we have outlined in our prior trend reports are potently shaping of (and complementary to) the path of financial inclusion in Africa. In this sense, it could credibly be said that financial inclusion is both a driver and a product of Africa’s ongoing institutional and developmental advance.